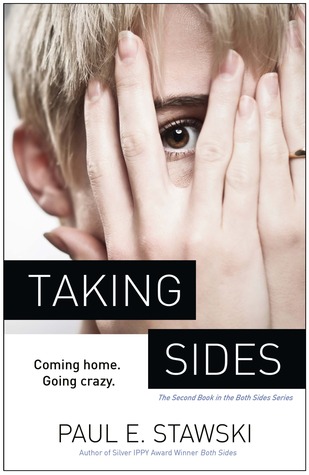 Taking Sides is the second book in the Both Sides series by Paul Stawski. This is a newer series of light science fiction meant for young adults and beyond. Last week I reviewed Both Sides and declared it to be a must-read for book clubs because of the limitless number of discussion points it could/would generate. I also want to mention that although this series is classified as young adult, it’s also the type of book that crosses the generation gap. The ethical issues broached are very adult and very complicated.

Both Sides by Paul Stawski (Both Sides #1) Book Review

Fellow booknerd warning: if you’ve not yet read Both Sides, switch the screen and get to reading OR be prepared for spoilers.

In the first book, Alex Featherstone and her quasi-friend were in a terrible accident that left both girls with traumatic injuries. Sandra, the other girl involved, was pronounced brain dead. Alex’s brain was functional, but her body was destroyed. A unique situation was presented to a specialist at the hospital and a groundbreaking surgery was performed: the first-ever brain transplant.  Alex Featherstone woke up in Sandra’s body. An identity crisis ensues when Alex realizes that some of Sandra is cohabiting her brain.

In Taking Sides, Alex is discharged from the hospital and goes home with her parents – the parents of Alex, not Sandra.  Genetically speaking, she’s the daughter of Sandra’s parents, but her identity and memories belong to that of the Featherstones. She IS Alex Featherstone; she’s just sporting a new body.

Having to adjust to a new body was hard enough, but the media circus that has surrounded the situation is overbearing. Media crews are camped out on her front lawn, the hospital has hired a personal bodyguard for her protection, and people are questioning her identity. With her feisty attitude and emotional walls built taller than a skyscraper, she keeps pushing away those who love her and those who want to help. But her best friend Jen and a teenage hacker who becomes involved push right back.

It isn’t long before Alex is forcibly removed from her home and remanded to court-issued foster care. Sandra’s parents have filed suit. They believe that the entire surgery was a hoax and that Alex had been brainwashed into believing she is Alex when she is really Sandra. After Alex recognizes that a few of her memories actually belong to Sandra, even she has doubts as to her true identity. But those close to her have no doubt: on the outside she is Sandra, on the inside she is Alex – mostly.

So, this is what I was waiting for. Although we don’t hear from the parents in first-person or even in third, we get more than a glimpse of what they’re going through.

Alex is craving love and affection from her real mother although she won’t admit it. She needs that mother-daughter connection to feel secure. Her mother is doting, but there’s a perceptible difference Alex can feel. If you will: imagine having your child come back to you in a completely different body, imagine the slight apprehension of total acceptance that THIS IS YOUR CHILD, and imagine your kid’s awareness of that issue.

And then there are Sandra’s parents who are watching their child come back to life – watching their daughter on every other news station every day, and seeing her with another set of parents. Although we don’t hear from them, we can infer by their actions that they are in denial, disbelief, and desperation.  (That alliteration was completely unintentional but I’m keeping it.) They sue the hospital and claim that Alex is a brainwashed Sandra. Citing a need for emergency action, they request the girl who calls herself Alex to be removed from the Featherstone residence at once.

The second half of the book is set in the courtroom and it is tense. When Alex is going through an incredibly difficult time with her own identity crisis, the last thing she needs is for others to question who she is. Medical evidence and psychological tests are called into question, along with witnesses across the board. It’s all enough to make poor Alex question herself even further. Who is she really?

And oh, the drama! I was feasting on my cuticles while flipping pages at record-breaking speed – I heard the theme music from The People’s Court in my head – I found my children to be increasingly irritating while they pulled on my arms to make me put down the book. Love my kids but sadly, I ignored them on this occasion. I was obsessed with the situation.

As a parent, that’s probably why I was obsessed. I’m going to go as far as saying that this book might appeal more to parents than it would to young adults because as an outsider, you can see both sides from a parental standpoint. How would you feel if your child passed on, but his/her body was given to another person and suddenly resurrected? It would take any parent every ounce of courage, no – not courage but strength, to give that child up, to acknowledge that the body was just an organ donation and was now just the house for another mind. I tried to imagine it and I honestly don’t think I could be that strong. I would lose my sh**.

But, and there’s a big BUT, we’re reading this from Alex’s perspective and we can clearly see that this is Alex Featherstone in Sandra’s body.  So in the same token, although we can easily sympathize with Sandra’s parents, we connect with Alex and become increasingly frustrated when it seems that she has no control over her own life. I found myself daydreaming about being in her shoes and how I would react. It wasn’t pretty.

With this amazing emotional dichotomy felt and perceived, Stawski proves to be a new literary-fiction force on the scene. This sequel blew me away and I can’t tell you how pleased I am that Taking Sides rose above my expectations and really delivered a riveting sequence of events that fully satisfied my anticipation.

The very end leaves you with a confusing ‘Sopranos finale’ taste in your mouth, leaving you wanting more. Although no epilogue is provided, there is comfort in knowing that the third book in the series will be out soon.