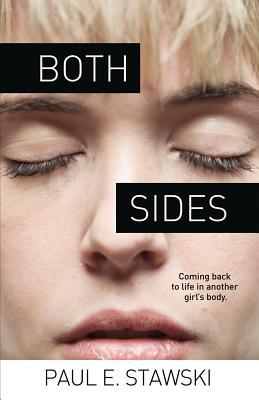 A Silver IPPY Award winner for 2014, Both Sides by author Paul E. Stawski is the first in a young adult, medical science-fiction series. As far as science fiction goes, this novel treads on the believable, revolving around a groundbreaking medical procedure where the first brain transplant is successfully completed. What happens next is anyone’s guess. Similar to My Sister’s Keeper by Jodi Picoult, but only in ways of medical ethics and emotional turmoil, Both Sides is your new MUST for every book club.  Russet & Kensington Press | 2013 | Paperback | 288 pp

Both Sides begins with a massive hook. Think you’re going to sit down and just read the first chapter? Good luck with that.

“I’m the freak you’ve heard about. The one you googled and watched all those videos of and forwarded to your friends with subject lines like OMG or hate 2B her. Or worse. Admit it. I mean, if I can be honest enough with you to call myself a freak, you can be honest enough to say you googled ‘Alex Featherstone + brain injury.’ A gazillion results in 1.3 seconds.”

The story begins with a flashback of Alex Featherstone’s accident. She was on a school field trip that day through a permission slip with a forged signature – anything to get out of class for a day. It was a ski trip, but it wasn’t a skiing accident, per say. Rather, the line holding her cable car broke. Alex and her classmate plummeted to the ground.

Both girls suffered massive head trauma. Sandra, the other girl, was pronounced brain dead – but her body was functional, viable for organ donation. Alex’s brain was intact (so they believed), but her body had suffered catastrophic injuries. Life support would be futile; her body was going to die and therefore her brain by extension. If they didn’t act fast, neither would survive.

A surgeon with all sorts of accolades is brought in and he has the expertise (and gall) to attempt a radical life-saving surgery. The ethical matters involved are iffy, but if both sides (see what I did there?) can agree to his solution, it will be a surgery for the record books. He proposes to use Sandra’s entire body as the donor to house Alex’s brain. Sandra will die anyhow and the plug will be pulled if her parents don’t agree. This is a chance for both sets of parents to have something.

Because the clock is ticking, both parents agree. The chances of success are slim, but if she wakes up, it will be (should be) Alex wearing Sandra’s body. Sandra’s parents understand this – their daughter is already gone. But she will still look like Sandra. It’s easy to see how the aftermath of the surgery will have long-lasting complications and ensuing ethical deliberations. But if it allows one of the girls to live, shouldn’t it be allowed?

But the story doesn’t weigh the reader down with the heavy aspects of a potential debate. Instead, the story focuses on Alex and what is going on inside her functional brain. While she is trapped within a broken, unresponsive body at the hospital, she hears everything going on around her. She is cognizant of the fact that her body won’t respond, she knows that it is bad, she discovers that Sandra is already gone, and she comes to understand just what they are planning to do.

But there’s more.  Alex and Sandra weren’t exactly the best of friends.  Alex snubbed Sandra on a regular basis and Sandra didn’t really care for Alex. Now snobby Alex is about to be put into a body she despises, one she has always found fault with. The question is – will she be alone?

Book club goers: I present you with your next big debate: Both Sides. Every book club across the board should consider this title and I highly suggest it. What you ultimately want with a good book club book is one that generates discussion, and the potential topics (and heated arguments) are limitless with this book. Like a good Jodi Picoult novel, one that tackles sensitive ethical issues head on (even if theoretical), it provides both sides (ha, I did it again) to a situation for a more provocative take on the situation.

The writing style is purposefully choppy, meant to illustrate a mind that is often clouded by drugs, a mind that is isolated and confused, and a mind that is struggling to survive. Many of the vignettes are passages that read one short sentence at a time, broken thoughts that account for a full paragraph. With so many sections like this, it makes for a very fast read.

While the ethical implications of the surgery are implied, they aren’t discussed as much as I’d hoped but this is because the entire novel is seen through the thoughts of Alex. Still, I really, REALLY wanted to know what was going on with the parents in detail. As a parent, that’s where my interest was leaning. Perhaps this will be in the second book?

Taking Sides, the second book in the series, was just released in February of this year and I’ll be diving into it tomorrow. There are a million different avenues the author could take and I’m dying to find out his chosen path.

Both Sides is a brilliant concept that is bound to leave nagging shadows in the back of your mind. Positively unforgettable.

Both Sides
by Paul E. Stawski