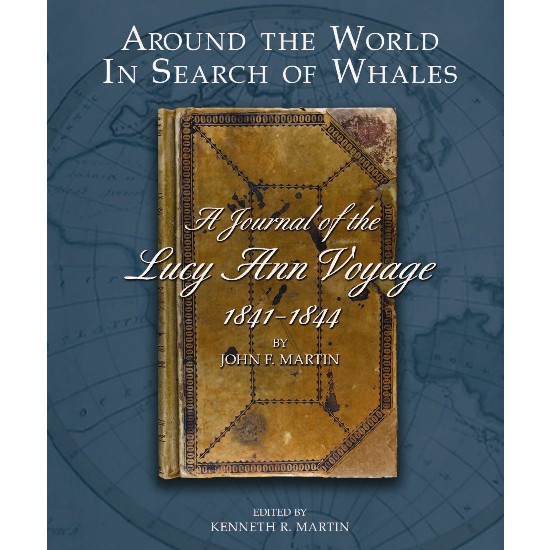 “Around the World in Search of Whales: A Journal of the Lucy Ann Voyage” launches Dec.9 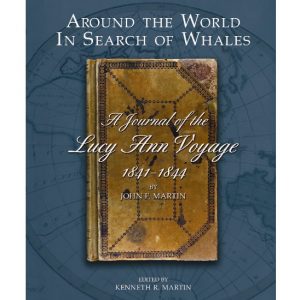 “Cursed whaling and quit it. Dam them [who] will not get up after night and burn their shirts to make a light to curse a whaleship.” With that final journal entry, written in June 1844 after a homecoming bender, John F. Martin kissed off his eventful, eight-year whaling career. But he retained his journal. How fortunate for posterity! Over many decades, maritime scholars and enthusiasts have published Martin’s quotable tidbits and handsome paintings in piecemeal fashion because they engage casual readers and specialists alike. Now, at last, his masterpiece will be handsomely published, in its entirety, for all to savor. This 300 page, hard bound publication features 125 color illustrations.

On December 9, 2016, the New Bedford Whaling Museum will release the long-awaited publication, Around the World in Search of Whales: A Journey of the Lucy Ann Voyage.  The hard-bound, non-fiction book is a recounting of a 31-month whaling voyage aboard the whaleship Lucy Ann (1841-1844). The book presents, in its entirety, the personal account and illustrations of whaleman-artist John F. Martin, edited by Kenneth R. Martin.

John F. Martin was at sea during the cultural heyday of American whaling. Though thousands of logbooks, diaries, and journals have survived the days of Yankee whaling, none have matched Martin’s combination of droll narrative and evocative watercolors.

A book launch will be held on December 9, from 6 pm to 8 pm, at the Whaling Museum. The event is free and open to the public. The book can be purchased at the White Whale, the Museum’s gift store, or online at www.store.whalingmuseum.org, or call (508) 997-0046.

His journal is considered a masterpiece of its genre. Thirty-one months of daily entries are vibrantly and sometimes comically detailed by the seasoned, savvy observer with a humorous take on the whaling trade. It is richly illustrated with elegant, vivid watercolors large and small: whales, whaling encounters, ships and boats, sea creatures, distant landfalls, and exotic strangers.

The detailed account of life aboard Lucy Ann includes dangerous encounters, shipboard shenanigans, faraway ports, good times, bad food, close scrapes, and dashed hopes, described in a rollicking comic style worthy of a professional author. His observations and illustrations are second to none in their historical, anthropological, and biological value. 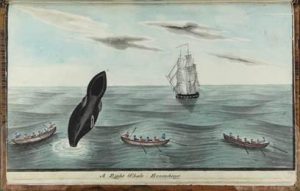 Illustration from Martin’s journal: July 27, 1843 “In the forenoon a whale breached entirely out of the water with the exception of his flukes.”

About the New Bedford Whaling Museum

The New Bedford Whaling Museum is the world’s most comprehensive museum devoted to the global story of human interaction with whales through time, and the history and culture of the South Coast region. The cornerstone of New Bedford Whaling National Historical Park, the Museum is located at 18 Johnny Cake Hill in the heart of the city’s historic downtown. Museum hours April through December: Daily from 9 a.m. to 5 p.m.The Museum is open until 8 p.m. every second Thursday of the month. Closed on Thanksgiving, Christmas and New Year’s Day.  Admission is: Free for Museum members and children aged three and under; adults $16, seniors (65+) $14, students (19+) $9, child and youth $6.