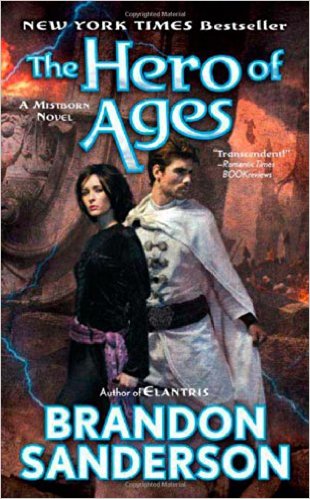 The Mistborn saga is not over, but the first trilogy ends with book three, The Hero of Ages. Spoilers for the first two will be impossible to avoid in this review. The third book in Sanderson’s unique high fantasy wraps up Vin and Eland’s quest to stop the end of their world of mist and metal. Tor Fantasy | 2009 | Paperback | 748 pp

In the Mistborn series, the world is divided between the nobility and the skaa (the have-nots and slaves). The ruling class are often imbued with special metal-burning abilities (allomancy) and they are not allowed to mate with the lower class, lest their powers might mix into skaa blood – but of course this happened often. In the first book, Vin was a street rat who was placed into a crew led by Kelsier, a Mistborn. Vin is also a Mistborn, which means she can burn all of the metals instead of just one like the common mistings – she’s basically a superhero-death-machine. Their goal was to take down the Lord Ruler, a living God, and the ruling class – which they do. In the second book, Vin is paired with Lord Eland, the son of a nobleman and someone who always had a soft side for the skaa. He had freed the skaa and taken control of Luthadel, but armies were camped outside looking for a precious metal. Although their position was precarious, Vin and Eland were more concerned with ancient prophesy and when she found the Well of Ascension, the same one the Lord Ruler used to control the world, she inadvertently let Ruin, a great evil, out into the world.

The Hero of Ages begins with Vin and Eland following the clues left by the former Lord Ruler. They had it all wrong. The stories and legends about the Hero of Ages and the Lord Ruler’s ascension had all been tampered with by Ruin. While the Lord Ruler was by no means a good guy, he was able to keep Ruin imprisoned for a thousand years. Until then, they had always believed that the Lord Ruler was supposed to have let the power go at the Well of Ascension, because that’s what Ruin wanted them to believe. So when Vin found the well, she took in the power and let it go – Ruin had escaped.

The Lord Ruler had left caches of food and water beneath several cities with maps leading to the next ones. He had done this in preparation for these days, in case he was dead and Ruin had escaped, indicating that he actually did care about the people. The last cache is determined to be in the city of Fadrex which is held by an Obligator King, a priest of the former Lord Ruler. Eland and Vin are forced to march on them with an army of men and koloss (saggy blue creatures) but Vin is eventually captured and held by the obligator. Meanwhile, Ruin is perilously close to bringing mass destruction to the world. The ashfalls are higher, lava spills from mountains, and earthquakes shake the ground daily. With Eland not sure how to proceed and Vin captured, the situation looks grim. But there are two beacons of hope who yield little power: Preservation (Ruin’s opposite) and Vin’s former kandra, the contract-breaker Tensoon.

Much begins to fall into place about Ruin, the Lord Ruler’s ascension, and the creatures who can be controlled by Ruin. There is the First Contract that was made with the kandra and the Lord Ruler, Preservation and Ruin’s creation of man and Ruin’s eventual cage, the difference between allomanctic, feruchemical, and hemalurgic powers, the creation of Inquisitors, kandra, and koloss, the missing atium, people who can be manipulated by Ruin, and ongoing feuds on personal and public levels regarding religion. This probably won’t make much sense unless you’ve read the first two.

Sazed is a main character introduced in the first book and remains to be the most interesting character of the lot. He is a Terrisman and uses feruchemical abilities – strengths and powers he keeps in his metalminds (bracelets and rings). Mostly, he uses them to store information as Terrismen are keepers of knowledge. His specialty is the recording of all of religions before the Lord Ruler destroyed them. Always the one to preach different faiths to non-believers, it is Sazed who loses faith at the end of the second book. When Tensoon finds Sazed and brings him to the first generation of kandra, it’s a game-changer for Sazed. Hope is not lost and the Hero of Ages is yet to come.

The end is what you hope for in any trilogy – mind-blowing. And I absolutely loved it. Everything that you think you know – you don’t know. And everything you expect to happen – doesn’t happen. It’s better.

The Hero of Ages is an end to the first Mistborn trilogy, but it doesn’t stop there. There are three more books out on the Mistborn series, taking places hundreds of years into the future in a world of technological advancements (something the Lord Ruler had always forbid). I’m crazy to know where Sanderson will lead us.

The Hero of Ages
by Brandon Sanderson