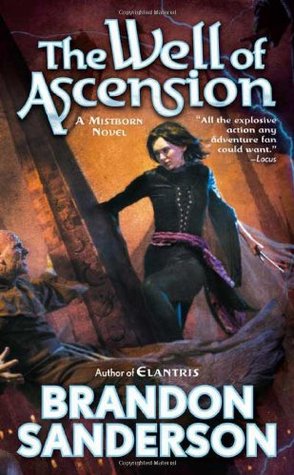 The Well of Ascension is the second in Sander’s Mistborn series, a high fantasy set of books with a massive following. In this world, some people are born with the powers of allomancy – the ability to ‘burn’ metals and use them in a variety of ways. Each misting can only burn one type of metal to use for a singular purpose (pushing or pulling metal, soothing emotions, super strength, et al.). But the exception is a Mistborn who has the ability to burn all of the metals and become super powerful. In this second book, we follow our young Mistborn protagonist through the mists and turmoil of a political vacuum. Tor Fantasy | 2008 | Paperback | 796 pp

In the previous book Mistborn, Vin was a skaa (slave) who had been gifted with all of the powers of a Mistborn. It was a rare trait coming from her highborn father. Only those in the ruling class were allowed to have the powers of allomancy, and any skaa children fathered by a member of the ruling class were to be exterminated to ensure that mistings were only born to noble class. Vin had evaded detection. To make a long story short, Vin was recruited by a group of allomancers to overthrow the Lord Ruler, a living God according to many. At the end, Vin did just that all on her own.

The Well of Ascension begins a year after Vin destroyed the Lord Ruler. Eland Venture is now king of Luthadel, put in place mostly because of his association with Vin who the skaa now see as a figurehead in their new religion. The skaa are now free and the city is doing well, but Vin is on edge.

Before they know it, not one but FOUR armies are camped outside the city’s gates including an army of Koloss (giant blue monsters) raised by Eland’s former friend. What they want is simple: atium. Everyone knows that the former Lord Ruler had been mining atium and had piles of it somewhere. Atium is the metal above all metals for Mistborn. When burned, it allows the Mistborn to see a few second into the future which is a game-ender in battles. He who controls the atium can give their Mistborn the best advantage. In a world where the houses of the nobility are often at war, a healthy stash of atium had its rewards. But after the Lord Ruler was defeated, his stash of atium was never found in Luthadel. The armies now sitting in wait don’t believe King Eland – they want that atium.

While the standoff continues, Vin and her former steward Sazed grow concerned about a bigger threat. When the Lord Ruler died, the mists should have gone and the world should have gone from brown plants and ashfalls to blue skies and green grass, but it didn’t. Instead, the mists which used to be benign, are now killing people at random and Vin is haunted by human-like figures forming in the mists and a constant thumping she can’t pinpoint. The old legend of the Lord Ruler’s ascension is studied and it seems that the evil he once beat (the deep) has been released by his death, and the Well of Ascension, where the Lord Ruler supposedly defeated ‘the deep’,  is once again bubbling over with evil mist and mayhem – but where is it?

The two story lines converge as the armies attack while both Vin and Sazed rush to their conclusion. It’s an epic battle of four armies and one supernatural force you don’t want to miss.

My only negative is that there is so much of this book that could have been summed up. This is a 750-page tome that sees the most action in the last 150 pages. However, it is such a compelling read, I couldn’t wait to pick this book up every night. Couldn’t wait. Absolutely Could Not Wait. It was as addictive and scream-worthy as the Game of Thrones TV show (the books too – people just really relate to that TV show).

The politics behind King Eland’s maneuvering during the standoff were important, but not as interesting as Vin’s story line – and it seems the rest of Kelsier’s old crew thought the same. They were never meant to be a part of the ruling class. It was a duty they got stuck with after their success. For the reader, it’s Vin and Sazed’s stories that are the most fantastic.

Vin has learned to drastically increase her abilities with a new alloy and she has become super powerful. In the first book, it would be dangerous for Kelsier (her teacher) to take on ten soldiers at one time. Vin had trouble with more than one. That’s all changed and now she can absolutely DESTROY hundreds of men in a matter of minutes. Vin has become so dangerous that she is the one piece of the puzzle holding the armies back from attacking because they fear her so much. Let’s just say that her character has grown into a force to be reckoned with.

Sazed is great character. He is a Terrisman and a ‘Keeper’. Like an allomancer, he has the ability to use powers but instead of burning metal, he stores his powers in bracelets and rings to be used when needed, such as speed or health or muscle. But mostly, he uses these adornments as a part of being a ‘Keeper’. He stores knowledge. His particular area of interest is religion and he has hundreds of religions stored up in his banks. This is because the Lord Ruler had all religion eradicated when he came to power. Most of the religions Sazed keeps are no longer practiced. Sazed refuses to go back to his people because he believes that something is no right with the mists and the Lord Ruler’s death. He frantically begins his study when war looms.

Another great character is OreSeur. He is a Kandra which is a creature who can imitate a human by basically eating them. But they have contracts with the humans to be allowed into society which they obey perfectly. OreSeur had played the part of Lord Renoux in Mistborn but in the Well of Ascension his contract with Kelsier is transferred to Vin. At first, Vin is put off. She doesn’t like OreSeur and she gives him the body of a dog – a great insult. But eventually, they come to understand each other and instead of simply honoring “the contract”, OreSeur goes out of his way to help Vin. He feels a kinship with her, and it goes both ways.

Vin and Eland’s relationship gets a little childish at one point, but quickly clears up. I didn’t want to see that drag out and thankfully, Sanderson didn’t leave a romantic cliffhanger where it wasn’t wanted or needed.

In all, truly unforgettable. Although it could have used some trimming – I loved it.

The Well of Ascension
by Brandon Sanderson