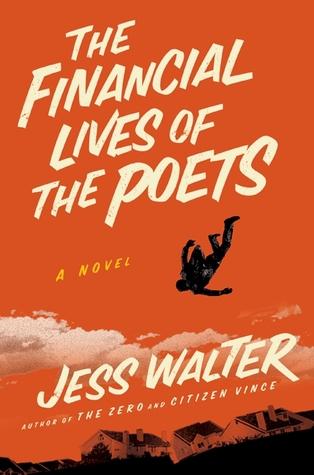 The Financial Lives of Poets is a work of fiction that follows our main character Matt through the current downward spiral that is his life. He is days away from losing his house (unbeknownst to his unassuming family), suddenly aware of his wife’s sudden disinterest in their marriage, jobless and living with his father who loses more of his memory with each passing day. And as dark and depressing as Matt’s life appears to be, each chapter had me racked with laughter at some point.

The story begins with Matt making a 2 a.m. trip to a local convenience store to pick up milk for his son’s morning cereal. As he contemplates the fact that he has six days to somehow obtain 30,000 dollars to save his home from foreclosure, he has a run in with some young local stoners. They convince him to smoke and he ends up spending the early morning hours galavanting with these two young men. He’s instantly connected to them, referring to them as “my boys” and they form a fast friendship.

When he returns home he’s met with his wife’s indifference to him as well as his aging father who he is slowly losing to dementia. They watch the evening news together while he waits for his father’s repetitive remarks concerning the best football players and then to the level of attractiveness of each female news anchor. Jobless, broke, weary of life in general, Matt is desperate for a plan to make some money quick and save the one thing barely holding his family together – their home. But he may attempt to find help in the last place he’d ever thought to find it, with his new young stoner friends.

The author of this novel narrates Matt’s story in chunks of stream of consciousness, we read the sudden switch of thoughts as though our minds are scattered and overwhelmed like his currently is. This style really helped me not only empathize with Matt despite his shortcomings, but also to really like him and see him as someone I knew almost personally. And his ramblings and random thoughts and ideas had me laughing out loud through each chapter.

If you are looking for a fun, meaningful and lighthearted read, I would recommend picking up this book!

The Financial Lives of Poets
by Jess Walter