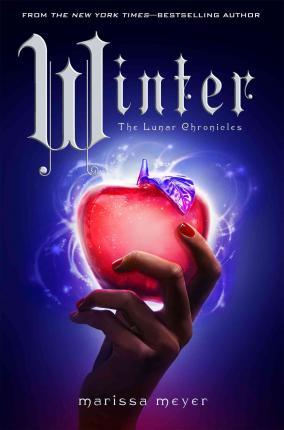 The end of an absorbing young adult series, Winter caps off the The Lunar Chronicles – a science-fiction retelling of an assortment of fairy tales. From the get-go, I fell in love with this series. Perhaps not as edgy as, say, the Red Rising Trilogy, it mixed the adorable with the witty and brought in elements of adventure, courage, and an evil overlord.

Cinder is based on Cinderella, naturally – and we are introduced to her in the first book. Like Cinderella, she is a second-class citizen but unlike the famed beauty – she’s a cyborg. Instead of leaving her shoe at the steps of the palace while running from the ball, she left her robotic leg. In Scarlet we’re introduced to a Little Red Riding Hood replica while Cress is Rapunzel. And because this is a bit of a space opera, we also have a Han Solo character. In Fairest which is a companion novel, we meet the evil Queen Levana who rules over the Lunars on the moon. With her complicated relationship with mirrors, she’s playing the role of the Evil Queen in Snow White.

Cinder is the main character throughout the series as she is found to be the rightful heir to the Lunar Throne. Queen Levana had thought she killed her niece, Princess Selene, thereby securing her spot on the throne. But Selene’s crippled body had been smuggled to earth where she was rebuilt. Cress, Scarlet, Captain Thorne, Emperor Kai, and Cinder’s droid Iko join together for the finale to help Cinder defeat Queen Levana.

In Winter, we’re introduced to Queen Levana’s stepdaughter – Winter. Strikingly beautiful and divinely innocent, she is adored by the people of Luna. She is, of course, Sleeping Beauty and when Queen Levana’s ‘huntsman’ fails to kill her, she is poisoned and put into a cryogenic freeze to stop the poison’s progress.

Before and after this, Winter teams up with the rest of the fairytale gang who have all been smuggled onto Luna for Emperor Kai’s forced marriage to Queen Levana. His agreement to the marriage alliance was done with the promise that Levana would hand over the vaccine to the deadly virus they unleashed on Earth. All he can do is hope and pray that his friends, the fairytale crew, will make it there in time to stop the wedding and defeat Levana.

Sounds a little hokey? It really isn’t. There is so much to enjoy in this series: the comical relief of android Iko who really wishes she was a hot, sexy human; the romantic relationships between each of the girls and their partners; the juxtaposition of the heartwarming fairy tales and the extremely violent fight and death scenes (this isn’t all sugar water – not by a long shot); the futuristic setting; the lack of damsels in distress – these girls don’t need rescuing.

I recommend this series to everyone, young and old.