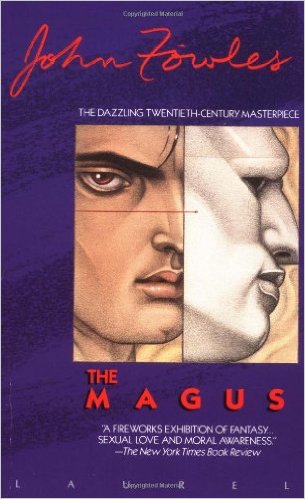 Since it was first published in 1965, The Magus by John Fowles has long been considered a literary masterpiece and one of the first true psychological suspense thrillers. Beset with literary eroticism and a labyrinthine plot that changes with each page, this tome feels like a black and white version of The Matrix.  Do you take the red pill or the blue pill? Little, Brown & Company | 1985 | Paperback | 668 pp

Set in the ’50s, Nicholas Urfe is a young Englishman with a desire to see the world. He accepts a faculty position at an elite academy on an isolated Greek Island and is excited for the opportunity. Before he leaves, he begins a fling with an Australian woman. Although he enjoys Allison’s company more than any woman he’s dated, he isn’t ready to settle down. The relationship ends on a sour note and when Nicholas leaves for his new position, he feels relieved and free.

Although the island is beautiful and exotic, Nicholas quickly becomes bored. He misses Allison. Thinking he may never be happy, he even flirts with the idea of suicide. Things quickly change when he meets Mr. Conchis, the island’s recluse millionaire and rumored German collaborator. Mr. Conchis invites him into his home and things begin to get very strange.

Then once more out of the blue he said quietly, “Are you elect?”
“Elect?”
“Do you feel chosen by anything?”
“Chosen?”
“John Leverrier felt chosen by God.”
“I don’t believe in God. And I certainly don’t feel chosen.”
“I think you may be.”

While talking about his childhood, his personal story and life, Mr. Conchis begins to play a series of games with Nicholas. At first he talks about a young girl, his childhood love. Then after telling Nicholas that he’s psychic and that Nicholas may be too, a young girl suddenly appears and the enigmatic Conchis hints that she is the ghost of his long lost love. But Nicholas isn’t having it. He isn’t falling for it.

He eventually meets the young woman and realizes that she has a twin after they try to trick him. When he tells Mr. Conchis that he has met her and that he knows about the twin, his story changes. Conchis tells Nicholas that she is a schizophrenic and he is treating her since he is a doctor of psychology. The story changes constantly and Nicholas learns through the twins that they are hired actresses and he is the target. They don’t know why or what result Mr. Conchis is trying to achieve. But he does know that he is not behaving the way Mr. Conchis wants by rejecting every idea and prodding for the truth.

Nicholas is certain that Mr. Conchis has tried this game with former faculty members and he tries to track down others who have been caught in Mr. Conchis’ web. While he believes himself falling in love with one of the twins, he receives a letter that his old flame Allison has committed suicide. Stories change again and again until he’s not sure who to trust and who is in on the game. When he finds of that the twins are still playing, and everything has been a lie, there seems to be no end in sight.

This book was chosen by one of my book clubs and I’m quite interested to find out the verdict. I, for one, found it to be infernally frustrating. Every single new bit of information the main protagonist thinks he’s discovered is often another lie. It’s one great big fabrication after another and it gets infuriating, especially when the book is enormous. After every twist and turn, waiting patiently for a reveal, there is nothing. Sorry for the spoiler, but you get rewarded with nothing. Just a bit of venom.

By continuing to play the game, Nicholas is giving Mr. Conchis and his cast the opportunity to keep playing. And with his bank account full, he can control ever single facet of the game no matter where Nicholas is, no matter who he speaks with. Anyone can be bought. Nicholas is desperate to keep digging for information and so stays in the game. I would have thrown in the towel months before and given everyone a big fat finger. Nicholas is practically asking for his continuing torment.

But why? Why are they playing this God Play? To shape him, mold him? For what purpose? There is no definitive answer. This book is as frustrating for the reader as Mr. Conchis is to Nicholas. It wasn’t very enjoyable.

The Magus
by John Fowles