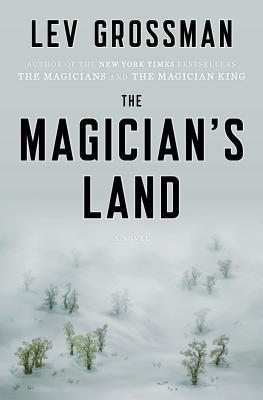 When my husband and I fight over the last book in a series (who gets to read it first), you know it’s a good series. He got dibs on The Magician’s Land and I lost my Kindle for a week. Every time I heard him yell or sigh or saw him bolt upright while reading, I felt that extreme pang of jealousy you get when someone’s enjoying the book you desperately want to read.  That’s a thing for bibliophiles, Scout’s Honor.

Being fully mesmorized by The Magicians series and consequently sucked into its worlds of Brakebills and Fillory, I’m still feeling a bit lost. This last book, although completely satisfying in every way, has the uncanny ability to make you lose that satisfaction when the book is done. (It’s over! Sobs…) Actually, it’s not that uncanny. Any good series will have that effect. Be prepared for spoilers if you haven’t read the first two.

Quick summary: The Magicians series has been a tribute to The Chronicles of Narnia and is a wonderful addition to the world of metafiction.  Our protagonist Quentin Coldwater discovered that magic is real and in a Hogwarts-style turn of events, Quentin was whisked away to study magic at the illustrious Brakebills. Better yet, he then discovered that Fillory, a fictional land from his favorite series which resembles Narnia is every aspect, is also real. In the first book, Quentin realized that quests in Fillory wouldn’t be as easy as they appeared in the books. His love interest was killed and Quentin’s aura was crushed. In the second book, he took the throne as one of the four human rulers of Fillory when suddenly he was faced with a dire quest. At the end, he saved the land of Fillory and magic itself, but the cost? Banishment from Fillory.

In the beginning of The Magician’s Land, Quentin has decided not wallow in misery. Instead he’s taken up a junior position as faculty at Brakebills which suits him just fine. He becomes absorbed in a new project stemming from a mysterious spell collected from a lost page he picked up at the Neitherlands just after his expulsion from Fillory. And he’s happy.

“Pacing the aisles of a silent classroom, surveying the exposed napes and rows of students bent over their fall exams, he realized he’d lost his old double vision, the one that was always looking for something more, somewhere else, the world behind the world. It was his oldest possession, and he’s let it slip away without even noticing it was gone. He was becoming someone else, someone new.”

When a student’s prank almost gets her killed, and Quentin is there to save her, he is fired immediately for not destroying the demon while the student was also expelled. As a free agent of the magical arts, he is called upon by a mysterious bird to participate in a quest. If he and the other chosen candidates can get a hold of a long-lost suitcase with Fillorian ties, he’ll get paid a handsome sum. He signs on because he needs the money, and so does the student who had been expelled.

Meanwhile in Fillory, something is happening. The world is dying and no one seems to know why. When Ember (Fillory’s answer to Aslan) informs the four ruling humans that the apocalypse is coming, they decide to embark upon a new quest to stop it. Whatever “it” is. Eliot, Janet, Josh, and Poppy’s quest eventually converges with Quentin’s as they fight to save a dying world.

This book has so many tidbits of shortened quests and varying story lines; it’s a whirlwind of adventure: Quentin becomes a blue sperm whale and swims to Antarctica to seek help from a fellow Brakebills’ professor; a blue niffin (a demon created in the first book) chases him through mirrors; Eliot and Janet encounter a giant turtle in a muddy swamp (Morla in the Swamp of Sadness? A definite tribute to The Neverending Story) who affirms that a giant end is coming in a way that made it sound similar to “The Nothing”; and new worlds are discovered including a dark opposite of Fillory.

In my opinion, the crowing jewel was Janet’s short story about her own personal quest while the rest of them had been on the high seas in the second book. It’s the story of how she earned her two magical ice-axes which she calls Sorrow.

“I call the right one Sorrow,” she said. “You want to know what I call the left one?”
“Happiness?”
“Sorrow. I can’t tell them apart.”

Janet is a snarky, class-A bitch but you fall in love with her after hearing her story. After enduring a ghastly trial of suffering and torment only to be publicly humiliated by a group who had feigned kindness, Janet didn’t cave like most would. Instead she paid instant revenge without hesitation, and it was epic.

The end is also brilliant. It all comes down to Ember and Umber, the twin rams who are the Gods of Fillory. Instead of giving you that warm feeling like Aslan did in The Chronicles of Narnia, they always gave the reader a feeling of uneasiness. They were too weird, and too vague. These emotional currents running underneath the story together with a back story of Ember and Umber’s birth come to the front at the end of The Magician’s Land in an absolutely wild scene.

The Magicians is a fantastic series. I highly recommend it to all who love fantasy, and to all who fell in love with The Chronicles of Narnia as a child.

The Magician’s Land
by Lev Grossman