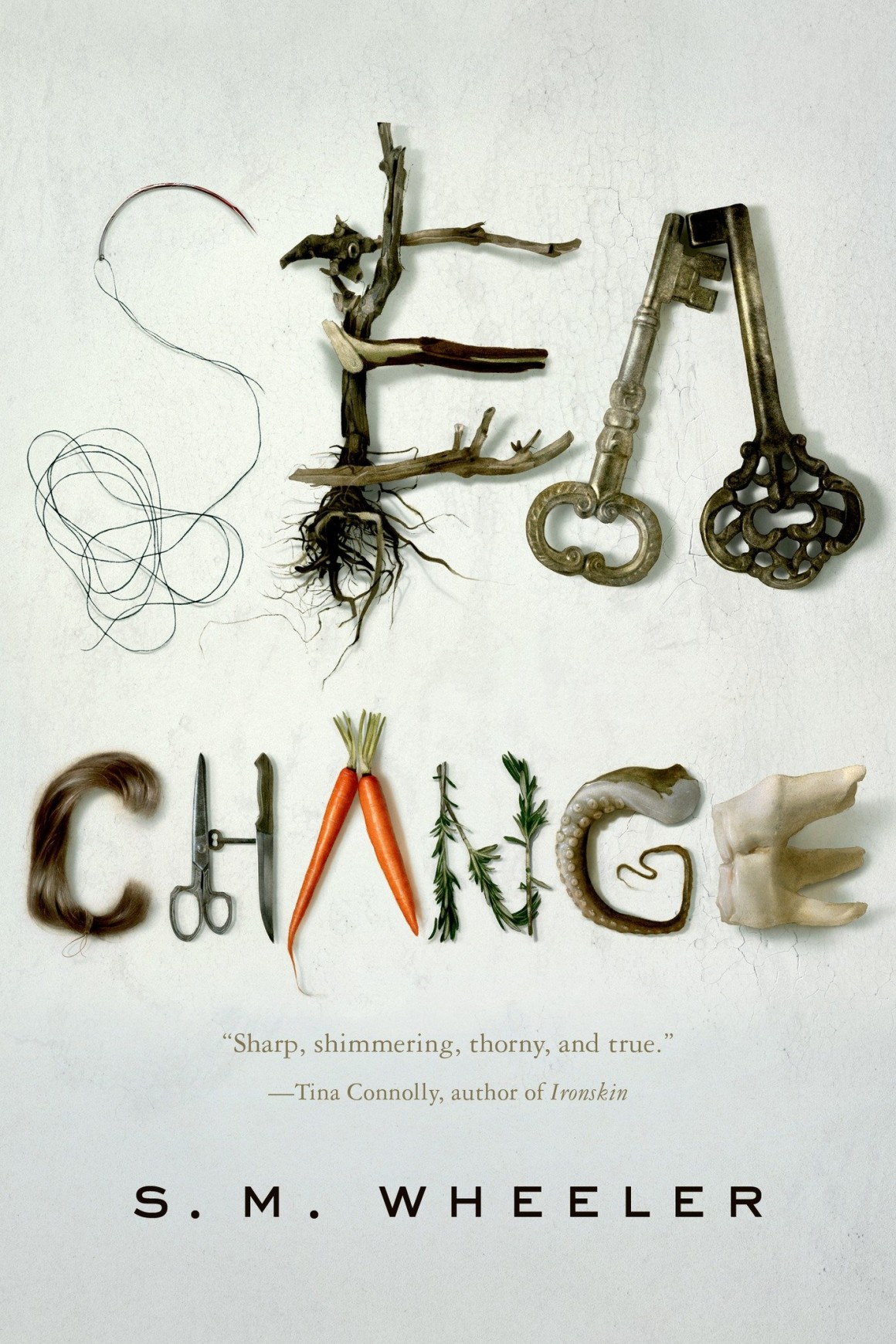 The old axiom ‘never judge a book by its cover’  is one I’ve admittedly always taken with a grain of salt; were it not for intriguing cover art catching my eye when sleuthing through the fiction section, many of my accidental favorites would have gone undiscovered. Sea Change is delightfully no exception to that lucky streak. This is author S.M. Wheeler’s first novel, and it’s nothing short of a triumph. Tor | June 2013 | 304pp

Lilly’s home life is an aristocratic sham. Her father drinks away his disappointments in his lifestyle and family. Her mother resents her husband and his quest for a second heir worthier than their peculiar daughter. The servants look the other way as both routinely blame Lilly as the root of their animosity, while simultaneously both trying to use her against the other. Lilly, however, detaches from the wretched household and finds solace in the sea, and it is here that she finds her true family in a sea kraken.

Eight-year-old Lilly happens upon baby Octavius in a tide-pool, fallen prey to a flock of seagulls. After rescuing him, Lilly beseeches him to do no harm to human beings, to which he happily obliges for her companionship, and holds steadfast to that vow his whole life. Their friendship is a profound and deep bond spanning over a decade, but tragedy strikes when Octavius fails to return home from a hunting trip. Sensing danger has befallen her friend, Lilly sets out to find his whereabouts and rescue him.

Her journey is wrought with peril and a chain reaction of contracts. To locate Octavius, Lilly blindly offers a troll anything it pleases, so it helps itself to Lilly’s hair and reproductive organs, rendering her sexless, but with the coveted information. Octavius had been captured by a sea captain and sold to the circus master Gero Alt, who will not relinquish Octavius easily. He’ll exchange the kraken for a coat of illusions crafted by the undead tailor, Nadel.

Upon finding the tailor’s shop, Nadel’s wife explains that he has been abducted and held captive by a witch. Should Lilly, now going by Lyle, return her husband, they’ll craft her a coat. But Lilly is met with even more conditions and deals. The witch holding Nadel, named Gottschalk, is actually enslaved herself to two bandits, who hold her skin hostage. Should Lilly reunite Gottschalk with her skin, she’ll help free Nadel. The task to retrieve the skin is fraught with treachery, however, as she must pose as servant to both the bandits and Gottschalk, and walk a thin line of double-crossing to appease both parties, all while keeping her true alliances and agendas secret. With every new deal Lilly descends deeper and deeper into a convoluted web of exchanges and promises, all for the ultimate end-game of Octavius’ freedom. But the final price she must pay is not only utterly unexpected, but it fundamentally changes everything about Lilly more than any other trial could have.

The overall tone of Sea Change feels like a rehash of the darker elements of Grimm folklore, but supplemented with much more complexity. Where the original translations of the Grimm fairy tales read like strung-together sequences of events, with no real motivations from the characters to give their actions context, Sea Change brims with humanity, villainy, selfishness, and compassion from every character; every plot twist is a consequence of either choices or timing, which makes the entire experience subversive and, in spite of its horror, utterly relatable. Not one choice or action slips by without somehow affecting everything to follow. Lilly/Lyle’s growth is subtle yet constant throughout, and with every challenge she changes and adapts to not only survive, but to see her quest through to the very end. Her love of Octavius compels her to jump foolhardy into pact after pact, but her faculties and resolve see every pact met.

A major selling point for me was that every character exudes layers; from the minor acquaintances starring in one scene, to the major allies and villains, each one is fleshed out with redeemable qualities as well as inherent flaws; there are moments when the bandits are utterly vulnerable, even endearing, and it’s hard to remember that they’re intrinsically amoral in other ways under other circumstances. Wheeler brings so much holistic life to every character that you find your own alliances blurred; you want Lilly to succeed, and you want Octavius freed, but you find yourself wondering at what cost to anyone she must cross in the interim.

Furthermore, the acceptance and acknowledgment of magic and monsters in this universe is so ingrained in their society, that magic seems less like a wondrous and mysterious concept and more like a sad and disdainful fact of life, best to avoid like drug dealers and sexual predators. This is not only a unique approach to building a setting, but it also allows the reader to readily accept that magic is an existing plot component without the necessity of justifying or even explaining it. Wheeler lets the casual disgust and matter-of-fact outlooks of her characters do literally all of the work, and it’s more effective than any long-winded realization/disbelieving-until-forced-to-believe scene could have been. In fact, because magic is presented to the reader as such an undisputed reality, all of the characters are freed of any presumptions about their species; you see the monstrosity of the human beings and the humanity of the mythological beings alike, seeing past what they physically are and straight to the core of their personality, because everyone is fleshed out as a whole and cohesive person.

Every element of this story was gripping and steeped in thorough development. I cannot praise this book or Wheeler’s command of storytelling enough, even in spite of the constant bouts of tragedy all the way to the bitter end.  Sea Change is about fundamental metamorphosis and the lengths we’re capable of going to in the name of love and friendship. It was a profound and touching read, and I look forward to more from S.M. Wheeler.

This is a fantastic read full of brutal storytelling and hypnotic language. Couldn't put it down, will read again when I recover from the heartache.