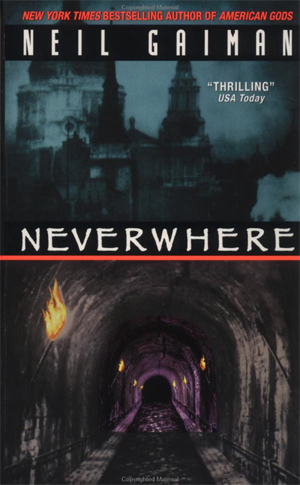 Neverwhere is one of those books that I’ve been meaning to read for a long time.  Everyone has their Gaiman favorite and more people have told me that Neverwhere is their absolute favorite over any other Gaiman book.  Now that I’ve finished, I don’t know what took me so long.  If you’re like me and this book has been on your radar for a while, end the wait – pick it up – lose yourself.  I have a new addition to my all-time favorite pile.  Avon Books | Hardcover | 1997 | 248 pp

Richard Mayhew is an investment analyst living in London as a fairly recently transplant from Scotland. He has a pretty good career, some good chums, and a beautiful and fabulously wealthy girlfriend who actually agreed to marry him.  On the night he is scheduled to meet her parents at a formal dinner engagement, a dirty young girl collapses in front of Richard and Jessica as they were walking to the restaurant.  When Richard notices the blood, he stops and tries to render aid.  Jessica barely notices and urges Richard to hurry and continue while the girl begs for help, pleading for him not to call the authorities.  Richard, the bumbling protagonist with a golden heart,  just can’t leave her behind.  He scoops her up and takes her home, leaving an awestruck (and very angry) Jessica behind.

The disheveled girl’s name is Door and Richard does the best he can to help.  She recuperates after a good night’s sleep but tells him little about what happened to her.  Things get strange when two odd and threatening men barge into his flat looking for her.  Door pulls a disappearing act and then reappears when they leave.  She then calls upon a pigeon to deliver a message at Richard’s window, and receives a reply by way of a rat whom it appears she can converse with quite well.  Richard is tasked with finding the Marquis de Carabas to help Door, which he does, and Door finally leaves his life, much to his utter confusion about what the heck just happened.

But life doesn’t return to normal because Richard’s life is already gone.  By entering the dreamlike world of ‘London Below’ to find the Marquis, his previous life in London Above had been erased as if he never existed. No one at work notices him, his fiancée doesn’t recognize him, and his flat is being rented to someone else. Richard has to find Door again to get his life back, so he goes back to London Below in search of her.

“On Friday, I had a job, a fiancée, a home, and a life that made sense.  (Well, as much as any life makes sense.)  Then a found an injured girl bleeding on the pavement, and I tried to be a Good Samaritan.  Now I’ve got no fiancée, no home, no job, and I’m walking around a couple hundred feet under the streets of London with the projected life expectancy of a suicidal fruitfly.”

With the help of the rat-speakers, Richard finds Door and the Marquis at the Floating Market, a gathering of the London Below inhabitants where safety is assured and violence is forbidden – but getting there is another story.  Door is on her own quest.  She is a gifted individual (having the powers to open doors – naturally) trying to evade the men who slaughtered her family and find out who ordered the executions. She needs to find the angel Islington who is the only one who can provide answers and who can possibly help Richard as well.

Now four members band together on the same quest line:  Richard Mayhew – a former member of London Above who wants his life back; Lady Door – the last surviving member of the royal Portico family who wants answers and vengeance; the Marquis de Carabas – an untrustworthy character who deals in favors and is bound by an old Portico family debt to help Door; and Hunter – a great warrior huntress hired as Door’s bodyguard at the Floating Market, a woman who is feared and revered by all of London Below.

Using the subway system underneath London that helps them reach all parts of London Below, a constantly disbelieving Richard and his questing group face tentacled monsters at the subway platforms (mind the gap!), romps through the murky sewage tunnels, the Earl’s Court – an actual fiefdom in an unused subway car, unexpectedly potent wine from Atlantis, royal and helpful rats, a trial of three tests at Black Friars with the help of some monks, a bit of time travel, a giant labyrinth guarded by a mythical and gargantuan beast, and all while being chased by the ancient Croup and Vandemar – the two most dangerous assassins in London Below who tout “Obstacles Obliterated, nuisances eradicated, bothersome limbs removed and tutelary dentistry.”

Neverwhere is a story of the fated protagonist (the ONE) who enters the slipstream world of London Below where vagabonds and those forgotten and overlooked reside in the tunnels, subways and sewers of London.  It is a world where old and new converge and time is relative, where there are fiefdoms and loyalties, where there are regal rats and loyal rat-speakers who serve them, where monsters and mythological races dwell, where darkness and shadows can come alive, and where thousand-year-old secrets are kept.

“There are little pockets of old time in London, where things and places stay the same, like bubbles in amber,” she explained. “There’s a lot of time in London, and it has to go somewhere—it doesn’t all get used up at once.”

There is fantasy and lore within a not-so-perfect world of sewage and grime.  Gaiman takes the people that you see every day in large cities, the ones you ignore and turn your heads from – the ones on the side of the road holding out empty cans, the ones muttering to themselves, the ones covered in filth and grime that you pretend not to see, and he creates a whole new world around them that is completely ignored by the London Above people.  In this instance and with this description, Gaiman’s undeniably fascinating world becomes a tangent possibility in the mind’s eye.  After reading Neverwhere, you might look twice at the ones you normally pretend not to exist.

The character development, the cheeky and absolutely hilarious dialogue, the underground railway station names and their otherworldly implications, and the fantastical world of London Below combine to form an obsession rather than a mere good read.  Neil Gaiman never fails to deliver, and Neverwhere has rightfully earned a place in my heart-of-bookshelves for favorites.

How may times can I say "favorite"? Not enough! I could also use the word "obsessed". That would be right, too.