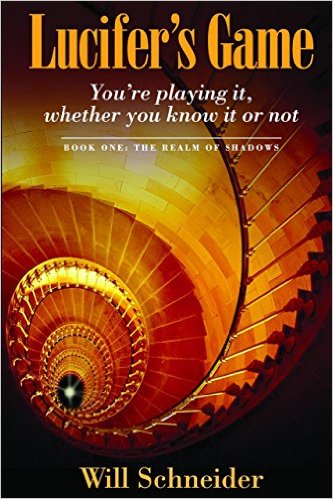 Lucifer’s Game, Book One: The Realm of Shadows by Will Schneider is the first book in an up -and-coming series and was published in 2015.  The sequel is currently being written.  It is a quick read at 262 pages but every page is used wisely.  You will not want to put the book down.

The book starts out with Jackson Trent having just arrived in Hawaii to start the healing process of a broken heart.  He has just lost both his wife (to divorce) and his daughter (to death).  Shortly after he arrives on the island, he encounters Lucifer.  Jackson agrees to spend the day entertaining and discussing spiritual matters with Lucifer.  We are slowly introduced to other significant characters on the island as we witness Jackson’s and Lucifer’s interactions with others and get to people watch without the risk of getting caught.  The book and the conversation makes you question what you think you know about life and spiritual matters as it clearly illustrates the struggle between light and dark, good and bad, right and wrong.  At the end of the book, we have developed a much better understanding of who Lucifer is and how he may truly act in and have an influence over our everyday lives.

The characters of the book are well developed and feel like they could be people you actually know in real life.  They are very well rounded and it feels like they could step off the page at any time. The book itself is well written.  The language is vivid and the word choice well picked to clearly paint the pictures in your mind.  The book, though it does make you think, is easy to understand. The book was a page turner for me until the very last page.  The only thing disappointing about the book was when it ended.  I truly look forward to the sequel.

Lucifer’s Game
by Will Schneider