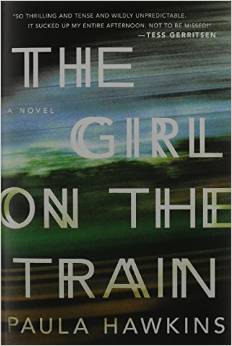 The Girl on the Train is filled with suspense.  Author, Paula Hawkins is very thorough with her descriptions of the characters and allows you to feel certain emotions when discussing certain people. You have sympathy for some characters while loathing for others.  It is quite an interesting story line. Characters include, but are not limited to: Rachel, her ex-husband Tom, Tom’s new wife Anna – who was Tom’s mistress during Rachel’s marriage, and Megan who lives down the street from Tom and Anna and who lives along the route of the train that Rachel takes every day.

Rachel is an alcoholic.  She lost her job when she showed up drunk and takes the morning train into London everyday to make it seem like she still has a job so that her roommate doesn’t bother her about getting a new one.  Because Rachel has infinite time on the train, she begins to romanticize about the couple who lives in a house along the train route, a couple she sees almost every day from her window at a train stop.  She even invents names for them.  One day, she sees something that destroys her perfect vision of the couple.  And when that woman goes missing shortly thereafter, the ties between all these characters become evident and quite nerve-racking.

Rachel is going through a very low point in her life.  She is no longer married, relies on alcohol, and cannot support herself.  You start to sympathize with her and feel awful for her.  However, you cannot help but think she is a little bit crazy.  Because the narrator alternates between Rachel, Megan, and Anna, you get many different perspectives which ultimately muddle the feelings you have for the characters. One narrator can make you loathe another character, but when the other person shares their side of the story, you tend to waiver between siding with just one person.

The Girl on the Train is similar to Gone Girl by Gillian Flynn but also entirely different.  They both cause you to feel very apprehensive about what is going to happen and you know, in the back of your mind, the ending is going to be very different from how you imagine it.  Although they don’t have the same story line, both books make you feel much of the same questionable gut feelings and doubts for each character involved.  So glad I was able to read this novel.  I read it in one day because I needed to know what happened!

It wasn't as good as Gone Girl but it was definitely interesting. It made you nervous most of the time!