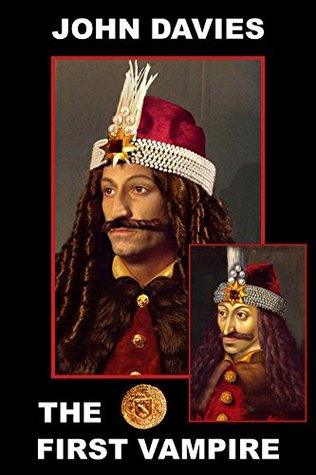 The First Vampire is incredibly well-researched historical fiction with a story line from the past that catches up with a story line in present times. Based on the life of Vlad the Impaler and his family lineage, John Davies inserts the paranormal and the supernatural to give birth to a new type of monster – and it’s after Vlad had already made his mark impaling his Ottoman enemies. Kindle Edition | 2014 | 536 pp

The story begins well before Vlad III’s birth and in a monastery where horrible deeds are taking place. Young boys who sing in the choir are often castrated so that they could keep their prepubescent voices (making them Castratos), but it failed most of the time and the child would die. Such a thing was about to happen to a boy named Bogdan who had the most beautiful voice. The elders wanted that voice preserved and it was planned that they would take his manhood before his voice could change. But another priest intervened, and the boy was saved. Bogdan eventually grew up and entered priesthood, still retaining a remarkable voice.

In his travels, Bogdan (now Father Gaston) came across a young girl named who had been ousted from a community of Satan worshipers. The girl had had been taught songs in Latin meant to summon the fallen one – but she had no idea what the words meant. A lone survivor of a village slaughter, she was picked up by the insidious community and used her for her prepubescent voice and then banished when she had her first moon blood. Cneajna was saved again by Father Gaston, and raised as his own. Against his oath, he also fathered his own child but as a good man, refused to turn his back on the woman who had tempted him, and paid for the upbringing of his child. Unbeknownst to him and many years later, he ends up with a granddaughter also named Cneajna.

Both Cneajnas are involved with the life of Vlad III – one as a mother, the other as a wife. One has the power to summon Satan and the other  is a direct descendant of the holy man still involved with Vlad’s court of affairs. After Vlad takes the throne of Wallachia (or Walachia), he rallies his countrymen against the Muslims of the Ottoman empire. Killing a Muslim in a Holy War didn’t help since death was considered a great victory to them. So he decided to make death something they would fear – and the impaling begins. When tragedy strikes in his own castle, and the priest finally realizes the connection between himself and Vlad’s wife, he takes a chance and calls upon the other Cneajna to use her voice and summon someone who can bring the dead back to life. A bargain is made, and a vampire is born.

Mixed between the chapters of Vlad’s story is that of a young girl in present times with a beautiful voice. It is that voice that puts her mother in a coma and causes a a rift with her father. After the accident, she loses the ability to sing. But when forced, a young man enters her life and helps her find what she once lost. In the process, she discovers a connection between herself and the family of Vlad the Impaler.

Vlad the Impaler has long been associated with the myth and legend of Dracula. His extreme cruelty toward any accused and the massive carnage he imposed upon his enemies in the form of bodies on stakes left everywhere as his personal calling card gave rise to stories of his monstrous nature. His father, being a member of the Order of the Dragon, adopted the name Dracul – and eventually, the myth of Dracula was born. Davies takes this well known person from history and creates a wonderfully intricate background detailed with known events of historical significance and only after the monster is created in Vlad the Impaler, a new monster emerges – the birth of the first vampire.

The story jumps from character to character and culminates at a pivotal point where the reader finally sees the connection between all of the main characters, and each one has a role to play in the creation of the vampire. The future characters are simply there to witness the event. It is an extremely clever development of one moment in time in which the reader has followed roots that tangle in the perfect way for a one-in-a-million chance outcome. The story line is extremely sophisticated with a high level of complexity.

The historical fiction aspect is a lot of fun to read. The history of Vlad III and his family was very well-researched as noted above, and Davies mixes into the story a whole array of historical events on record, and makes it all come alive with fictitious banter and relationship drama. Instead of attempting a period-style narration, Davies gives the characters more of a modern voice which makes the story incredibly easy to read.

Naturally – there is a lot of gore and darkness. This is Vlad the Impaler we’re talking about. From the onset of the book and its innocent beginnings, there are a host of atrocities: the highly detailed Castrato creation process, summoning of the devil, horrific impalings and thorough descriptions from insertion to exit, village slaughters, and lots of gory deaths. It’s an easy read, but then again – it’s not.

In all, a wild ride of a read for vampire and historical fiction lovers alike. The First Vampire is high brow horror for intellectuals that intertwines the delicate art of voice with historical events and the supernatural.

The First Vampire
by John Davies