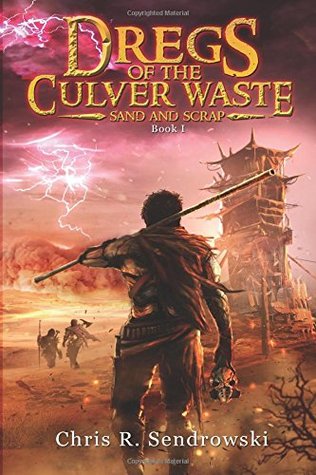 This is what I love. Finding an indie novel that is so stunning, it simply blows me away. Dregs of the Culver Waste is a dark fantasy series and it begins with Sand and Scrap. With a highly sophisticated plot sequence and a practiced hand for writing, Christopher Sendrowski has turned me into an instant fan. Pine Fire Publishing | December, 2015 | Paperback | 306 pp

The story begins with Michael Carter, a simple name for a simple character. He’s a young man on his own in the tough land of the Culver Waste, a land devastated by the magic wars from long ago. The men and mutants here eke out a living by venturing out into the sands to clean and to salvage for scrap.  It’s a dangerous job and few seem to return.

After Michael was robbed of all his hard-earned coinage, he was forced to stand in line for a job in the sands, and he landed one as a cleaner in the most dangerous area. His team consisted of a young mystic, a Garfaxman (a mutant with a tentacle for an arm), a gob (a dangerous cast out), and the charger (a magic man who must accompany all missions into the sand).

Out in the desert, the situation was dire, but the charger was there to keep them safe from the legions of traps left behind from the wars (think: buried landmines, but with spirit). And that’s what the crew was there to clean up, doing so with their charger rods and heavy suits and masks. Amid toxic storms and deadly creatures that lay in wait, the crew worked.

When Michael and the Garfaxman found a hidden bunker, they decided to investigate. Inside they found a treasure trove of old relics in perfect condition that could be sold, including a huge safe that obviously contained something of value. But Michael accidentally released a trap that bound a captive spirit to his own.

That spirit drove Michael away from his crew and into the far reaches of the desert in search of the key that would open the Karna-bara – the great safe they found. Only then would he be freed from the soul that torments and controls him.

“You have freed me from my tomb, yes,” the voice went on, “but now you are bound to me until my work is complete. That is the way of it.”
“The hell it is!” Michael shouted.
“Hell is what you will know if you don’t do my bidding. Remember, I am forever a part of you unless the bond is broken.”

As the plotting factions move in on the prize, the wastelands become more perilous. Stronger elemental storms and death surround the Karna-bara, and an ominous comet with a blade-like tail is ever-present – and was seen during the last wars. Michael, controlled by his bound spirit, chases the Karna-bara from its former hold in the sand, across the desert in the belly of a giant worm, and across the Acid (ocean) in the belly of a great whale.

There is so much to discuss with this novel but there is no way I could cover all of the magnificence this book presents.

The complexity is key, but it’s done so well that most readers should be able to easily follow it. There are a number of characters introduced in the book, and each one is ripe with description – even the ones who are not main players – the ones, for example, who are introduced just for their deaths. And some of the key players are not introduced until later in the book while some of the initial key characters are killed off. It’s a very George R.R. Martin-level of sophisticated character development and plot tangles.

The darkness also needs mentioning. There’s depravity of the worst sorts and people of every class fall victim to dark temptations and sinister plotting. There’s thievery, murder, rape, torture, addiction, rampant disease and starvation, and obscene cruelty. Our beacon of hope rests in the main character: Michael Carter – the red-headed innocent fool who, even without one coin, holds more decency than the highest of orders. It’s also worth mentioning that he’s the one with the only simple and Earthly name – the rest have names such as Drexil, Uxer, Waypman, Lamrot, Kremwa, et al.

“But you’ve no need to hide yourself here. We are all brothers aboard the Bastard, all raped and mutilated by the bitch we call the Culver.”

Despite the darkness, there is an overload of adventure and plenty of breathless action. Battles, magic demons, pirates, court intrigues, and so much more. This book has it all.

The crowning jewel is the world building. The dark milieu and the fantastic descriptions of this world where Mad Max meets Dune will leave an indelible impression upon the reader, even the minute details such as the unique words for time such as calls and turns. And as awful as the world is, the curiosity is much too persuasive. It’s difficult to let this world go.

Incredibly well written, this is one of the best first novels I’ve ever come across. I will be counting the days until the second is released. Dregs of the Culver Waste is highly recommended to everyone who loves fantasy and the noir. Just as the meridum addiction is an integral part of the book, this novel is also highly addictive. You’ve been warned.

Sand and Scrap
by Christopher Sendrowski