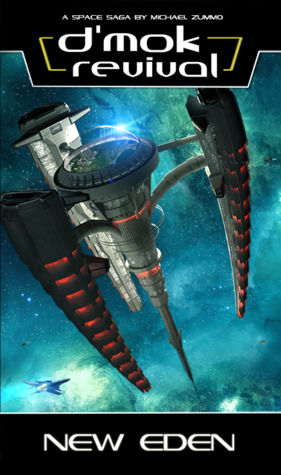 I opted for D’mok Revival after reading an enticing blurb on this hardcore science fiction odyssey, not realizing that it was part of a bigger package. D’mok Revival is the fourth book in the New Eden series but thankfully, it reads as a standalone. Because I was jumping into the story line several books in, there was a large host of characters I had to get acquainted with rather fast, and at first I was a little confused. But as the story gets going, the reader gets immersed in no time.

Rhysus Mencari is a powerful D’mok Warrior with amazing abilities. He is human but has abilities that leave him unrivaled in combat. Mencari leads an intergalactic special teams unit (I made that term up) comprised of different species and genius members to battle the last remaining vestiges of Nukari occupation, the imperialist invaders who colonized, enslaved, and killed on coutless worlds. Mencari had thought that his wife and son were killed in a blast but finds out that they are alive and possibly prisoners of the Nukari. His goal becomes personal as they attack Nukari stations looking for information on his family.

With his group of hand-picked mercenaries and warriors, mostly humanoid with variations such as cat faces, light green skin, and ranging abilities, they plan attacks and follow through on several missions. Each character has a game-changing role to play affecting the outcome of each battle such as the ability to mentally enter data streams to engage in stealthy hacking operations, mindwalking to discover information, throwing energy as a weapon, creating force fields to protect teammates, and so on. Many of them fight with weapons, but the D’mok Warriors ARE weapons and can even fly through space without needing a ship.

While looking for his wife and child and while the search is on for an ally who was taken prisoner, we follow Mencari and his team as they free prisoners from a Nukari outpost and come face to face with Jask – a young Nukari Beast Warrior – making instant enemies, take back a planet with divine help, come to the rescue of a ship under attack, plan and execute an epic underground prison break, and participate in a wild hoverbike race. Each battle or event is a page-turning adventure for the reader.

I missed the character building that is hinted at for each character in prior books, but I must say that my absolute favorite is Naijen. This warrior loves to battle and practically salivates when he knows there is a chance of smashing skulls. He lives for the fight. Humorous and feisty, he reminded me of an extremely powerful Gimli (LOTR). Then there is Jask who the story begins with – a young beast warrior honing his abilities. Although the book starts with him, we don’t see him again until his encounter with Mencari. I was initially confused about this because I loved that opening chapter and I wanted to know more about Jask. I got what I was looking for in an eye-opening “holy sh**” moment when Jask’s true nature is revealed. It begins and ends with him.

Although I didn’t get to witness Mencari’s ascent into his current position as a leader and warrior, he isn’t a stationary or predictable character. He experiences growth in his D’mok abilities and suffers disastrous emotional setbacks. This hardened warrior is all too human and his uncontrollable rage threatens to tear apart everything he had accomplished. Although I had not read the earlier books and followed Mencari through his adventures (which I want to stress again) – I felt his rage toward the end. I was right there with him. And I was nearly tearing pages out from my death grip on the book.

Overall, this is epic science fiction – an intergalactic tour de force that stimulates the imagination.