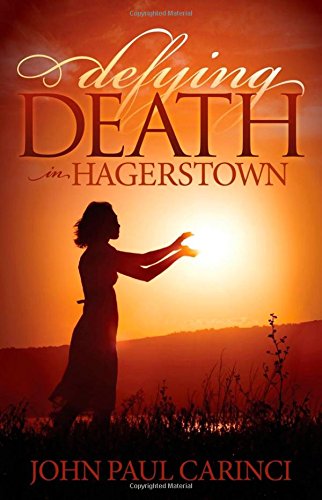 Defying Death in Hagerstown was truly surprising.  This book is about a man named Louis Gerhani, a journalist in the throes of heartbreak who was slowly declining in his career and well-being. When threatened with job termination by his unsympathetic boss, his last chance to keep his career was dependent upon writing a story about a 110-year old woman: Lolita, a resident of Hagerstown, Maryland.

Louis made the trip to Hagerstown but was less than enthusiastic.  However, after meeting the elderly Lolita, evading gunfire, and circumventing some lethal poison, Louis got more than just a fluff piece for his newspaper. His once standard mission morphed into an investigation about the murders of three woman in 1923, Hagerstown.  As he became more involved with finding clues to uncover the suspect in the murders, he became the victim of several near-death experiences, bringing about a constant safety net of personal police surveillance.

Defying Death in Hagerstown has inspirational moments that really share life lessons. Author John Paul Carinci nailed the part of a 110-year-old inspirational woman to a tee, offering sage-like lessons you can actually experience and then take away from the book and apply to your own life.  There is also a strong entertainment portion in the story – never a dull moment!  When the protagonist isn’t talking about solving a crime, he’s talking about love and the past.  Carinici also incorporates the ever-salient struggle of overcoming alcoholism.

I recommend this book to anyone who loves romance, mystery, or police procedural – as well as to anyone with a love for great fiction.  The combination of genres makes it a really easy read.  The book comes to a very surprising conclusion that neatly answers all of the questions posed throughout the book.  I truly think I will look into reading more of Carinci’s novels based on Defying Death in Hagerstown.

Has something for everyone!

This book was very surprising as I continued to read the book. When reading the description it appeared that the book was going to be more about crime and solving murder than love and wisdom. However, I was proved wrong!