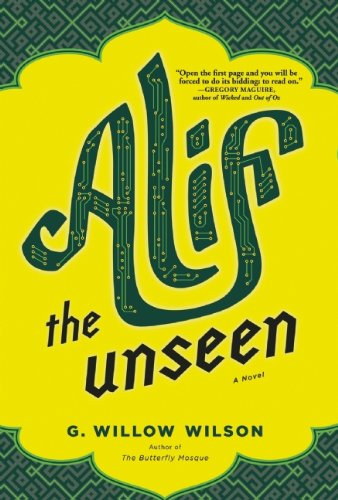 Alif the Unseen is an interesting novel that combines Arab myth and modern technology. The premise is alluring: a young hacker protecting free speech finds himself running from authorities and winds up in the hands of a magical jinn. Through this work of fantasy fiction, the reader catches a glimpse of real Arab culture from the eyes of nobody – a half-Arab, half-Indian young man with skin too dark and no money to speak of. Grove Press | Hardcover | 2012 | 433pp

Alif is his code name, his handle. He is young but he’s one of the most respected hackers in his Middle Eastern State which is ruled by an Emir. Where speech and opinions are heavily censored, free speech is something that Alif can provide to his clients, whomever can pay him. Alif is able to keep his clients cloaked and their information freely available on secure websites while hiding identities as he hides his own.

“Internet friends are real friends,” said Abdullah. “Now that you pious brothers and sisters have taken over half the planet, the Internet is the only place left to have a worthwhile discussion.”

When Alif’s lover is forced to put him aside for an arranged marriage, Alif feels betrayed. He creates a new program that somehow identifies Insitar when she’s online, and hides himself from her so that she can ever find him again. The problem is that Insitar’s new betrothed is The Hand, the one behind the online security forces employed by the Emirate. When The Hand finds and identifies a hacker, that person is never heard from again. The new program Alif installed on Insitar’s computer leads them directly to Alif.

Before Alif is forced to shut down his servers and go on the run, Insitar sends him a curious book through his best friend, Dina. It has something to do with The Hand but he doesn’t know what. Not knowing where to turn, he seeks the help of Vickram the Vampire, an elusive character with shady connections. After seeking him out, they soon discover that Vickram isn’t human – he’s a jinn, and he wants to help Alif.

The book in question is old and it tells the secret stories of the jinn. It had been dictated to a human by a captive jinn hundreds of years prior. The Hand believes that with quantum computers, he would be able to crack the code of the book and gain access to an otherworldly power.

“The Thousand and One Days is not just a bunch of old tales, little pimple. That title is no accident – this is the inverse, the overturning of The [Thousand and One] Nights. In it is contained all the parallel knowledge of my people, preserved for the benefit of future generations. This is not the work of human beings. This book was narrated by the jinn.”

Alif’s journey becomes a quest and he is joined by Dina – his best friend, Vickram – the jinn, Bilal – an old Shiekh, the Convert – an unnamed American female academic, a prince, and Alif’s neighborhood cat who apparently had always been a jinn in disguise, among others.

Alif is Unseen in his own world as a hacker. In this novel, he enters the world of the Unseen which exists as a parallel world to his own and it’s filled with mythical creatures and cities of their own. These creatures are just as fragile as humans in ways. Some are good, some are bad, some can make mistakes, and others, like Vickram, can find redemption. I enjoyed the duality of the two worlds described where the creatures of the Unseen can crawl into our word and affect the people (thoughts, actions, vices), but without humans and their beliefs, they wouldn’t exist.

“Superstition is thriving. Pedantry is thriving. Sectarianism is thriving. Belief is dying out. To most of your people the jinn are paranoid fantasies who run around causing epilepsy and mental illness. Find me someone to whom the hidden folk are simply real, as described in the Books. You’ll be searching a long time. Wonder and awe have gone out of your religions. You are prepared to accept the irrational, but not the transcendent.”

Vickram the Jinn is a great character. He’s not perfect and he’s rough around the edges, but he makes no excuses for his behavior. He has powers of illusion that help Alif and his friends when the time is needed and he’s definitely the guy you want by your side in a fight. Vickram is the anti-hero who dutifully comes to aid those in need even when it means danger for him.

Another duality that exists in Alif the Unseen is the pairing of old world myth and modern computer code. It can been seen as two languages, one transcribed in Arabic and the other in binary. Put them together and it’s a way man can gather secret information about the jinn.

Although I am tech savvy, I struggled with the dreamlike passages that described Alif working his way through coding sets to figure out the book. It wasn’t heavy in precise tech-speak, but was the exact opposite – vague and confusing, like a dream. My attention began to wander during these moments.

Alif the Unseen is a fun read that showcases a different culture wrapped up in a world a fantasy, intrigue, and danger.