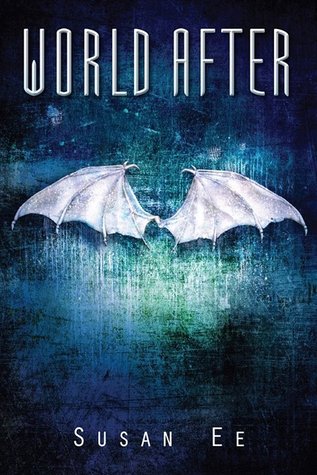 World After is the second book in the wildly popular Penryn & the End of Days series by Susan Ee. This young adult fantasy is set in a post-apocalyptic United States after the world was essentially destroyed by warrior angels who heralded the coming judgement day. There will be spoilers on the first book, so if you haven’t read it yet, it’s best to click the link below to visit the review on Angelfall. Skyscrape | 2013 | Paperback | 314 pp

In Angelfall, teenage Penryn and her family (a handicapped sister and her clinically insane mother) are just trying to make it out of the city and into a less populated area when they came across a fight among angels. Her sister was taken, her mother disappeared, and she befriended the angel she saved, but not after he had his wings torn out. Raffe helps her get to the Aerie (the angel stronghold) in San Francisco and break her sister out while Raffe fought his own personal battles. In the end, Penryn’s sister and mother escape, the Aerie is destroyed by a human resistance force, and Penryn had been paralyzed by a hellish monster engineered by the angels  – but Raffe thought she was dead. Everyone thought she was dead.

In World After, Penryn wakes up while they are bringing her body back to the Resistance stronghold. The reactions are less than joyous – some are wary, thinking she’s been brought back to life by the demon (Raffe) who brought her body to the humans.

We learned in Angelfall that Raffe is a nickname for Raphael and he is an archangel, one of the leaders of the warrior angels. With Gabriel destroyed, Raffe was next in line for the position of Messenger and this is why he was attacked- other angels want this position. His wings had been ripped off and when he sought help in the Aerie, he was betrayed. He was given giant bat wings while his white feathery wings were put on the angel who had cut his off – Beliel. His new giant bat wings were the reason why the humans thought he was a demon.

Raffe brought Penryn’s body back to the humans because he had developed a bond with her. And it was growing more intense, going beyond simple friendship. The fact that his sword would let Penryn hold it (the angel swords are sentient) intrigued Raffe. Her assumed death nearly destroys him.

But Penryn is not dead and desires nothing more than to find Raffe, but doesn’t know how. The people in the Resistant camp don’t trust her family, especially now that her little sister Paige is back. In the Aerie, they had experimented on Paige, changing her into an abomination. Now Paige has been mutated into a monster with razors for teeth and a lust for blood, like a little pint-sized zombie. Before the men can do something about Paige, there is an angel attack and dozens of the “scorpions” (the monsters that had stung Penryn and paralyzed her) are dropped from above. After the attack, the people begin to bury bodies and Penryn tries to stop them because she knows they aren’t dead, just paralyzed. No one listens, and she is imprisoned with her mother – Paige is gone.

With the help of a woman that owes Penryn, they escape and head toward where they think Paige will be. What they find is a conspiracy. Humans being rounded up like cattle and sent to Alcatraz Island to be forcibly turned into the scorpion creatures (termed Locusts by the angels) or fed to them. The reason why is even more heinous.

When Penryn is forced into servitude under a formidable angel, she catches a glimpse of Raffe. And when he sees her – alive, sparks fly and all hell breaks loose.

Susan Ee does it again with some amazing storytelling. Just as in the first book, there are strange, unexpected delights that keep the reader utterly fascinated.

In Angelfall, we discover that no one can lift an angel’s sword unless it has permission from the sword. If the sword senses allegiance to its master, it might let you touch it. So when Penryn was able to lift Raffe’s sword during that first scuffle and throw it to him, even Raffe was perplexed. It never happens. In World After, Penryn is still in possession of the sword, and in her hands it begins to train her how to use it by providing flashbacks. It also shows her how much Raffe cared for Penryn.

Penryn needed to disguise the sword so she makes a princess teddy bear scabbard for it and renames it Pooky Bear. She didn’t realize at the time how insulting this was to the sword.

“I’ve mentioned that names have power, right? Do you realize that when she fights battles, she’s going to have to announce herself to the opposing sword? She’ll be forced to say something ridiculous like, ‘I am Pooky Bear, from an ancient line of archangel swords.’ Or, ‘Bow to me, Pooky Bear, who has only two equals in all the worlds.'” He shakes his head. “How is she going to get any respect?”

I couldn’t stop laughing. Penryn only named it as such to be a smart-ass, never realizing that the sword was actually sentient.

Penryn’s mother continues to be psychotic and unusually resourceful. Her sister is another story. Although Paige has been unnaturally altered, she has a trick up her sleeve – something the human scientists included as a final act of defiance against the angels.

While reading, all I wanted was for Raffe to see Penryn and know that she was alive. This doesn’t happen right away, not until the final third of the book which was aggravating. But when it finally does happen, the heavens shatter and stars fall from the sky. Although angels and humans are not allowed to be together romantically, there is a smoky attraction neither will admit – but they don’t have to. It’s a mutual understanding and a beautiful sort of love: trusting and natural.

I am off to book three. I can’t get enough of this series and I hope you enjoy it too.

World After
by Susan Ee