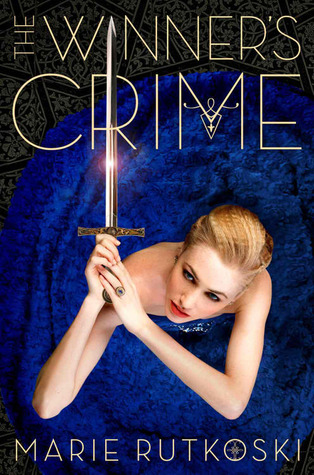 The Winner’s Crime is the second in The Winner’s Trilogy by Marie Rutkoski, a young adult high fantasy based on a world similar to this one but steeped in the past with traditions of imperialism, conquering lands, colonization, and the taking of slaves. Imbued with a romance between the highest and the lowest of societal standings, this second book pits our plotting protagonists on even ground, but there is little romance to be had this time around. Farrar, Straus and Giroux | March, 2015 | Hardcover | 402 pp

I’ll be giving away a major spoiler on the first book so if you haven’t read the first – you might want to rewind to my review of The Winner’s Curse.

In the first book, Kestrel lived as the pampered daughter of General Trajan, the leader of the Valorian military. They lived on the peninsula of Herran which had been colonized by the Valorians long before Kestrel could remember. The once affluent Herrani had been forced into slavery while the Valorians had moved into their homes and taken over businesses.

Kestrel bought a new slave at auction for her homestead, not knowing that Arin (the slave) was a member of a rebel sect of Herrani dedicated to reclaiming their lands. Kestrel had unwittingly fed him military information and aided in the successful Herrani revolt. And although Arin (the slave) protected her during the crisis, and even though they fell in love, her duty was to her empire. She escaped, but bargained with the emperor for a truce.

In The Winner’s Crime, Kestrel is forced to keep up appearances. She was able to get the emperor to leave the Herrani alone by allowing them to be autonomous while paying tax to the Valorian empire. In this way, the Valorian empire could focus their military strength toward the east. But the cost was that Kestrel, now a national hero with a rumored past, must wed the emperor’s son. It’s a good alliance, but it’s the last thing Kestrel wants. Still, she tries her best to keep up appearances since there are so many rumors swirling about her relationship to a former slave.

Arin went from being a slave to being the governor of Herran. He was only a child when the Valorians swept in, killed most of his family, and enslaved the children – but he had been a member of the ruling class prior to the conquest. Back in his old home, he tries to breathe life back to his country. Although he is no longer a slave, he is still beholden to the Valorian empire by way of taxes and tithes. But the most important thing troubling him is Kestrel’s engagement to the emperor’s son. Was their entire relationship a lie?

It wasn’t. Kestrel can’t stop thinking about Arin and what could have been. She’s desperately in love with Arin but is forced to play the “tough love” card to protect him. To his face, she pretends that everything had been a game to her – strategic moves. But behind his back, she surreptitiously works as Herran’s informant known as ‘the moth’ and works to keep Herran safe from the Valorian emperor’s sadistic plots. Furthering her ambition, she also manages to influence military strategy in the east to conquer lands with the least amount of casualties.

Kestrel keeps all of the good work she does hidden, and keeps the face of a tyrant visible for Arin, and everyone else. She wants to push Arin away to keep him safe by making him hate her. This also makes her look better in the face of a nation who thinks she had an affair with the enemy.

The rouse works for a while, and Arin is destroyed by her supposed heartlessness. But when Kestrel uncovers a new plot against the Herrani, and her heart can no longer be betrayed with lies, everything falls apart.

Opinions? Here we go. I was frustrated. At first, I liked the frustration because it was the underbelly of the romance. But I expected that frustration to be resolved at least midway through the second book. But no. It isn’t resolved at all, not even by a fraction. The entire book is laden with frustration. LADEN. Perhaps I was supposed to be sad or feeling pangs of sorrow within my heart, and if this was the case – those intended feelings missed me. I was simply irate – for the duration.

Kestrel infuriated me by pretending to work against Arin. Instead of telling him the truth, she continues her lies which makes everything worse. I appreciate her strength and propensity for strategy (after all, she is a gamer), but fostering hatred is not a good bet, especially with Arin. And with Arin – his foible with Kestrel is disturbing, and his final move is ‘mind-blowingly’ (if that’s a word) stupid.

I was very irritated with the interactions between our main characters, but there is a light. The plotting, the side character interaction, the subplots, the world building, and the court intrigues just couldn’t be buried by the annoyances of the main characters. With everything else, it was an amazing read. I found so much to be wrong with the book, yet I was up all night reading it – couldn’t put it down at all. So – I guess this book is one that will nip at your emotions whether you like it or not, and tether your eyes till the final page.

The Winner’s Crime
by Marie Rutkoski