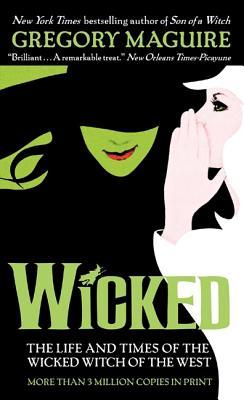 Here’s a gem that’s been out for over twenty years but one that I’ve just now finished for the first time. Admittedly, I’ve never seen the musical which is probably a good thing – like reading the book before you see the movie. But for those of you who haven’t read it and even if you’ve seen the play – this is your call to pick up Wicked: The Life and Times and the Wicked Witch of the West by Gregory Maguire. Harper Collins | 2007 (first published 1995) | Paperback | 519 pp

Wicked provides an entirely different look at life in the land of Oz from political and theological viewpoints. Ultimately, it describes the life of Elphaba Thropp, otherwise known as The Wicked Witch of the West, a common epithet she never even realized she had until the end. Be prepared to fall in love with Elphaba, because she’s not the witch you envisioned according to Gregory Maguire.

Elphaba’s entrance into the world of Oz was scandalous enough. Born into the family of Thropps, her father being the Eminent Thropp – a  birthright she could deign to hold if she chose – she was born straight out green and with teeth like those of a shark. She bit the finger off a midwife. It’s obvious that she is illegitimate and the great Dragon Clock that had been making rounds with ferocious predictions had pinpointed Elphaba to be a birth of evil. But – the family endured. Eventually Elphaba lost her sharp baby teeth which gave way to more human teeth, and the odd child whose first word was ‘Horror’, became a normal child. Although – still green as a frog.

Elphaba enters the University and becomes roommates with Galinda (soon to become Glinda – the Good Witch). The two could not be more opposite with Glinda prancing around with her sunny disposition and Elphaba constantly brooding about social inequalities. Against all odds, they eventually become best friends and called themselves sisters. Elphaba’s younger sister enters the school, a delicate and highly religious girl with no arms, Nessarose – who will later be known as The Wicked Witch of the East.

The new dictator of Oz (the Wizard of Oz, as we know him) has decried Animal rights. In Oz, there is a big difference between Animals and animals, in which the former capitalized version are sentient and intellectual beings who possess a mind like any other humanoid in Oz. The evil Wizard is taking away rights for whatever reason. Elphaba, Galinda, and Nessarose begin to help Doctor Dillamond, who happens to be a goat and their professor, because he is secretly working on a theory to help prove that Animals should have their rights restored. When Dillamond is murdered, Madame Morrible (the school’s head mistress) calls the three girls into her office after the funeral. The girls have a hunch that Morrible was behind the attack, after all – she seemed to be against Animal rights, and Morrible seems to be aware of their suspicions. She curses them, sort of. Morrible binds the three girls together with sorcery and tells them that they will be women of strength in their own parts of the Oz and for her own personal bidding, calling them the ‘Trio of Adepts’.

This is when the girls break up. Elphaba, disgusted with Morrible and wanting to take part in the uprising against the Wizard of Oz, leaves the school and her sisters – but she never forgets her love for both of them. In time, each sister builds a new life, each one in the area that Morrible had predicted. All sisters have powers and all are feared or revered.

Elphaba never meant to be a witch, at least – not a bad one. She only wanted to help the Animals gain back their freedom. But her heart-broken isolation, her magical flying broom, and her sinister-looking skin has everyone thinking otherwise.

Wicked brings into question religion and superstition as well as fate. And in the question of fate – are we free to make our own paths or are we fated to a singular destiny? – the author really doesn’t provide a set conclusion. We see this with Elphaba’s meeting with the great Dragon Clock at the end as well as with Miss Morrible’s binding of the three sisters. Did she lock them into their fate?

The writing is superb and the story line is brilliantly conveyed. It is written almost in the style of early twentieth century literature, but modernized just enough to believe it came from 1995. Absolutely fantastic; it’s no wonder why the musical is such a hit. I can’t wait to get the rest in the series.

Wicked: The Life and Times of the Wicked Witch of the West
by Gregory Maguire