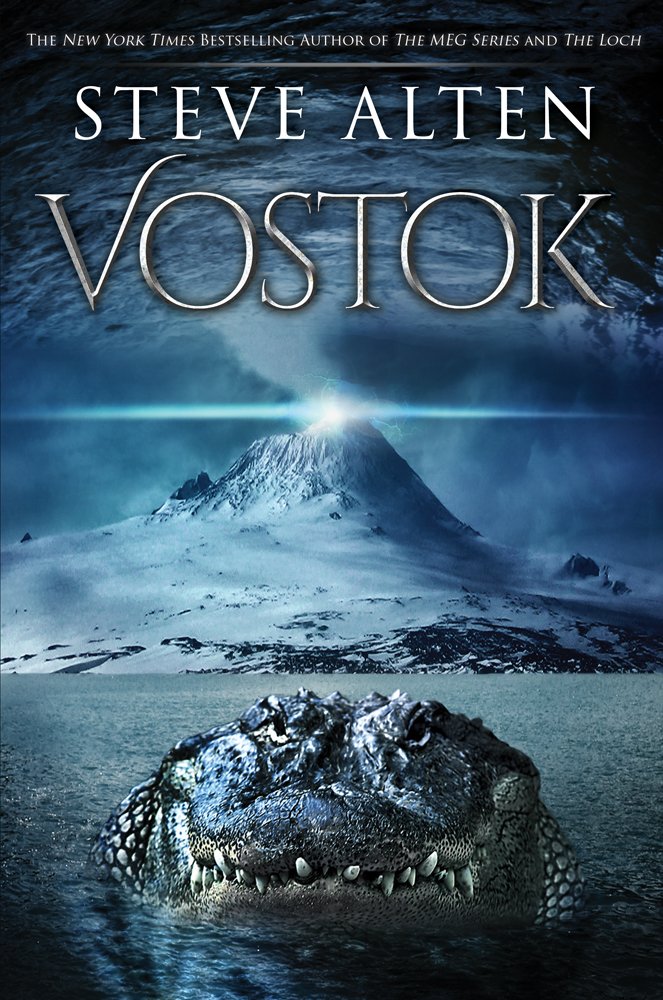 East Antarctica is the most barren, desolate tundra on Earth. With record lows in the negative 130s, it’s a pristine frozen wasteland void of much human interference. Buried two and a half miles under ancient ice lies Vostok, a massive liquid lake untouched for 15 million years. When scientists from Davis Station discover two perfectly preserved Miocene era specimens engrossed in what appears to have been a battle cut short, human hubris jump-starts a frightening campaign to study the sub-glacial lake entombed below…for how can there be a liquid lake trapped within the ice? Rebel Press | 2015 | 416pp

Our hero and narrator is famed marine biologist Zachary Wallace, renowned for his expertise in ancient species, and suffering major backlash from a recent scientific endeavor. Having identified, tracked, and killed the Loch Ness monster, Zachary has all but single-handedly eliminated tourism in the Scottish glen, causing a chain-reaction of bankruptcy and desperation from the locals. His marriage is strained, his father is falsifying “monster attacks” to reignite Loch tourism, and Zachary is grappling with post-traumatic stress from several different underwater disasters.

His fame gets Zachary sought to participate in one of the most ambitious scientific expeditions in history: bore through 13,000 feet of ice in a 3-man submersible and study the pristine ecosystem below, thought to contain little more than single-celled organisms. The submersible, called the Barracuda, is equipped with Valkyrie lasers to melt ice away on the descent while refreezing it behind, effectively creating a slowly-shifting bubble around the Barracuda as it inches through to Vostok. The water levels are believed to reach the bottom of the ice shelf, which will allow the Barracuda to slip effortlessly into the lake, and upon ascent, the Valkyrie lasers will melt a new tunnel continuously upwards while the water pressure shoots them up like a geyser. They will be connected via fiber-optic umbilical cord to the Vostok command base top-side, which will maintain their power supply and communication throughout the entire expedition. Easy enough.

At first Zachary declines the offer presented to him by a Dr. Ming Liao and her colleagues; between the claustrophobia of an untested descent and the isolation from his family (plus his own demons with underwater exploits), he opts to instead stay home to take a teaching position and reconcile with his wife, Brandy. But after his father, Angus Wallace, pulls a bribing stunt and cons Liao and her colleagues into inadvertently legitimizing falsified animal killings to rekindle Loch Ness Monster fever, Liao compels Zachary’s involvement with the threat of a civil suit that would ruin his entire family.

The 3-man crew is comprised by Zachary, the beautiful Ming Liao, and former US Air Force jet fighter pilot Benjamin Hintzmann, who has been discharged from the Air Force due to a classified incident in Pakistani air space. He’s irritable, paranoid, impulsive, and trusts no one involved in the organization of this mission. As they make their descent, the first sign of trouble comes when the final layer of ice melts way, not to an easy slide into water as all the calculations had predicted, but to a 130ft free-fall through open air. The Barracuda is stranded.

The ecosystem of Vostok is unlike anything the crew could have imagined: ancient Miocene era species, from plankton to mammals, have somehow managed to thrive inexplicably for 15 million years. As they hunt for a higher water level to allow for ascension, the crew faces terrors and crises abound in their colossal underwater prison. And this is all just the first act: between conspiracies steeped in secrecy and lawlessness, behemoth monsters on the prowl, and astonishing revelations of Zachary’s origins, the second half of the book dwarfs the first in its escalation and its themes. There’s much to navigate through and much that can be spoiled, but whilst trapped in Vostok the plot takes a massive hard-left into a completely different territory that brings to light much deeper and more emotionally paralyzing subject matter.

I’m truly mixed here. Don’t get me wrong, this story is thrilling, well-executed, and compelling in its deeper connotations, but it stamped me with such genuine anxiety throughout, complete with a sense of futility toward the end in light of the greater afterlife themes. I can’t remember the last time I encountered a novel that left me so utterly dizzied between enjoyment and chronic apprehension. Between the frigid descriptions of Antarctica chilling me to my core and generating within me a faux seasonal depressive response (the cold and I have a very public and ongoing feud), I also felt genuinely nauseous during the descent scenes. The idea of inching slowly through thousands of feet of ice, all while being encased to prevent pressure rupturing, is downright petrifying; the claustrophobia was real, and I found myself having to take frequent breaks throughout the first half of the story, in spite of the fluid writing style and gripping plot. I was altogether haggard.

Vostok, while a stand-alone story in its own right, features a crossover cast from some of Alten’s previous works. Zachary recounts his back-story very fully, so references to the sci-fi novel The Loch don’t compromise the events of Vostok. A new Alten reader can begin confidently with Vostok and not feel robbed of the story from having missed the previous installments, but the seed of intrigue is effectively sown to keep a new reader interested in Alten’s entire body of work.

Vostok is written in First Person perspective from Zachary’s point of view…mostly. A few points in the story lacked Zachary’s presence, and Alten addressed these in different ways. There were about three scenes (excluding the prologue chapter) that was shifted to Third Person because Zachary had no whatsoever involvement in the events therein. There were also about two chapters from True’s perspective, but those were presented as audio logs of him reciting his experiences rather than a First Person structure. I’m just personally finicky about that kind of stuff; I don’t mind transitions from First to Third, or with shifting narrators, but when about 95% is written a certain way, the few and brief blurbs of alternative narration almost feel like an afterthought. I preferred the audio log route; it was a more creative way to embellish plot points beyond Zachary’s perspective. The shift from First to Third is so drastic, yet so infrequent, that when it did happen it felt unfinished.

Some areas were very dialogue-dense and reliant on long-winded explanations rather than prose, but that’s to be expected between scientific deduction and military briefings. Those spots can be a bit more chewy to read through, but the layman can definitely make sense of the information presented. Sometimes the same characterization traps that befall any cinematic STEM character affects Zachary: he may be a marine biologist specifically, but he’s also capable in physics, chemistry, and pretty much any scientific field when the need arises. It’s a minor transgression, of course, because the character is brilliant, but a trope is a trope, even in brief snippets.

All in all, Vostok is a finely crafted piece of compelling literature rife with dimension and intrigue. The drastic tonal shift from the claustrophobic, horror-fueled first act to a quick and gritty mystery/thriller was abrupt yet enticing. With as many characters as appear in Vostok, those that carry any true girth in the story are well-rounded and well-written. My personal favorites are Brandy and True, but that may have more to do with my penchant for crude Scots. Truly, my only real aversions are in the occasional perspective shifts because I tend to get distracted by technical inconsistencies. Those few pockets of slightly out-of-place styling pale in comparison to the pros of Alten’s work, and I recommend Vostok with the highest regard.