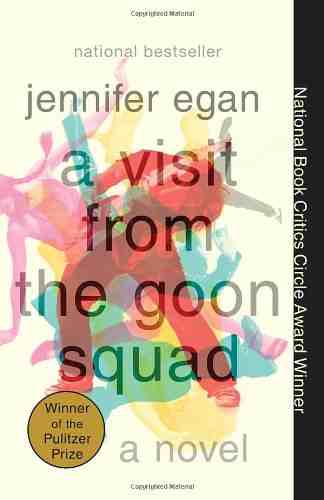 A Visit From the Goon Squad is a work of fiction by Jennifer Egan which most notably won the prestigious Pulitzer Prize in 2011. The novel focuses on two main characters, the music executive Bennie and his assistant Sasha. Egan explores the themes of adolescence, aging, death, friendship and family through a uniquely woven narrative that jumps from character to character and does not stay in chronological order. Knopf Doubleday | Paperback | 2011 | 341pp

The story begins with Sasha discussing her recent week with her therapist. She has an issue with stealing items from people, not money but items – wallets, scarves, pens, etc. She brings about a recent one night stand with a man named Alex who she is having a terrible time with but decides to bring him home anyway. When he discovers her table full of stolen items (unbeknownst to him) he is intrigued and Sasha has a sudden urge to be intimate with him as he is interested in her table of treasures.

We then begin a chapter following Bennie, who is in a board meeting and is suddenly recalling embarrassing and shameful memories from his past. He’s unable to focus as he recalls attempting to woo a woman while he was in school and her walking in on him in the bathroom and making sudden, uncomfortable eye contact. Sasha, enters the room to bring him his coffee. The sequence of these events are out of order as in the first chapter Sasha described Bennie as her former boss. In this chapter we see she is still actively employed by him.

Now this is where the story really grabbed my attention. The next chapter follows Bennie and his adolescent friends from when they are in high school. I had to backtrack to realize who these characters were I was reading about. Egan continues this through the entirety of the novel. Each chapter details a snapshot in the life of someone who is directly or indirectly involved with either Bennie or Sasha. None if it follows chronological order. There is even a whole chapter that is written entirely in PowerPoint.

Egan uses some of the most creative writing I have come across to discuss the lasting issues of childhood, growing old and perseverance. It led to a lot of reflection on my life and the world as a whole, how so many of us are intricately connected without realizing it.

If you’re looking for a fast paced, unique and interesting story, this is the book to read.

A Visit from the Goon Squad
by Jennifer Egan