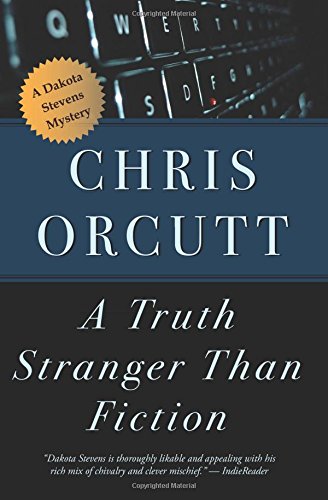 A Truth Stranger Than Fiction is a clean, fast-paced mystery thriller, packed with unexpected shifts, and with several overlapping yet opposing parties all asking the same question: where is E. Conover Wright? Orcutt | 2015 | 389pp

Our hero and narrator, Dakota Stevens, is a witty and charming PI detective hailing from Manhattan who, in the opening scene, is procrastinating unpacking his new office on Fifth Avenue. An eccentric teenager named Kelsey seeks out his help to find her missing brother, world-renowned Sci-Fi author E. Conover Wright, who has gone missing. As Dakota starts to write off the case as a false alarm, his office is bombarded by several inquiring groups, all in pairs, and all out for Conover.

First, two rookie FBI agents on a matter of homeland security; they’re content to leave at Dakota’s insistence–for now. Next, twin thugs from North Dakota hoping to use force to locate the missing writer. Third, a pair of demure and professional pretty-boy mobsters who clamp shut. Lastly, two mysterious Chinese gentlemen in suits. As suddenly as they all appeared, they clear out of sight, but not out of commission; they all lurk in and around the building, on the prowl for the writer’s little sister.

Dakota has to act fast. He has to formulate an escape, clear out of Manhattan to his upstate hideout, and get to his partner in Connecticut before he can truly investigate this bizarre case, and all with a scared teenage girl in tow. What could E. Conover Wright possibly have been involved in that would have branded him a target to so many disparate groups?

As cursory and minute clues begin to crop up pointing in dozens of vague directions, Dakota, his exotic Ukrainian partner Svetlana, and Kelsey find themselves in a whirlwind scramble all over the Northeast and Midwest, trying to uncover the world-changing conspiracy a Sci-Fi writer was attempting to expose.

Truth is stranger than fiction, but it is because Fiction is obliged to stick to possibilities. Truth isn’t.

This quote is planted strategically before the novel even opens, as if to remind the reader to bear that in mind going into this story. It’s an integral root for several reasons: primarily, it absolves the reader of skepticism of the outrageous acceleration of plot points from the occasional 0 to 60, and allows the reader to accept everything as quickly as it occurs. Secondarily, but more importantly, this quote sets the tone through which the reader may examine the book’s climactic conspiracy in its real world implications.

First, we view it in the fictional component, the high-energy PI mystery-thriller scope: Twain’s quote serves as a solid foundation for me, because by page 17 the story takes a hard left into immediately outrageous territory; the rapid succession of pair after pair of hunters, all conveniently cropping up within minutes of each other, seemed initially ridiculous to me. But then, after plugging through that opening scene, everything else fell into place and nothing felt outlandish anymore. The tone was officially set for big and boisterous calamity. The reader is instructed right out to expect the unexpected, and as such the preposterous situations our heroes find themselves in feel plausible, in spite of the shock factor of how dangerous/exciting/unlikely the situations are. The mystery they’re investigating has layers of revelations, not a singular ‘whodunnit’ conclusion, so it’s fascinating to unravel. Because some of the events are so unlikely, while told in Dakota’s realistic-sounding, sarcastic 1st Person narration, it funnily enough comes off at times as too ridiculous to not be true.

Without giving away the entire plot of the story, the most I’ll mention as far as the real world implications are concerned is this: the conspiracy Conover is involved with has to do with exposing alternative energy solutions, and energy is a very real and persistent issue happening now as we remain fundamentally reliant on finite resources. Orcutt’s goal is to open the eyes of his audience to the scientifically feasible alternatives that could exist outside of the quashing efforts of lobbying powers, hopefully to spur real investigation into real options for handling the energy crisis. Twain’s quote thus serves its double-meaning very subtly; to suspend your disbelief, and to make you question what, in your everyday life, you do believe.

Now for some disclaiming. Generally speaking, one doesn’t usually intentionally jump into a series out of order. As it were, this is actually the third Dakota Stevens mystery novel that Orcutt has published; luckily for me, a very forgiving aspect of the mystery genre is that, while characters may crop back up from book to book, each case is its own whole and singular story. I was intimidated when I looked at the cover and realized this was a third book and not a first, but Orcutt’s style had huge allowance for jumping in. Everyone who pops up in Stranger Than Fiction that had existed previously in Dakota’s world is given a sentence or two of context; enough to give the unfamiliar reader a leg to stand on, but not so much as to muddy the current story at hand for a seasoned Orcutt reader. It was refreshing to not have my hand held at the reappearance of old faces that were new to me; spoon-feeding the reader is just nauseating, and I’m satisfied that the dialogue carried the weight of the characters’ dynamics, and that it was done in such a way that was neither condescending nor leaving me in the dust.

My one disappointment was in Kelsey. Series staples Dakota and Svetlana had two previous installations to account for their characterization, but, incidentally, because they were already fully-fleshed before the events of Stranger Than Fiction, they come off as whole and complete just through their dialogue and mannerisms. Kelsey is brand new to this story, and her character sadly fell into the Useless Teenage Girl trope at times, despite intentions not to. She wasn’t whiny or bratty or anything, she was more or less just there as a plot device, and some of her actions seemed completely left-field for plot-propelling purposes.

That being said, there was a very colorful cast of characters ranging in skill, intellect, wit, and personality. While Dakota was conveniently good at pretty much everything he did, I loved his sense of humor and his constant references to movies and music that predate him. If I had to anchor him to another character for comparison, I’d say he’s a Tony Denozzo of NCIS type. And Svetlana was superb, an absolute queen. She existed in an effervescent glow of grace and poise while being cold, calculating, and predatory. As she herself described her dynamic with Dakota, she “solves the cases and handles the money.”

A Truth Stranger Than Fiction is definitely worth the read. Between the fast pace and the clean, fluid language this story is hard to pause, and it’s thought-provoking in its real-world relevance. This story is highly entertaining and fun in its action and humor, but beholden to a deeper focus. From the strategic Mark Twain preface to the surprising climax, Orcutt takes a truth and hides it in plain sight.

Very thought-provoking and engaging mystery with deeper implications, all wrapped up in humor and action. Highly entertaining read.