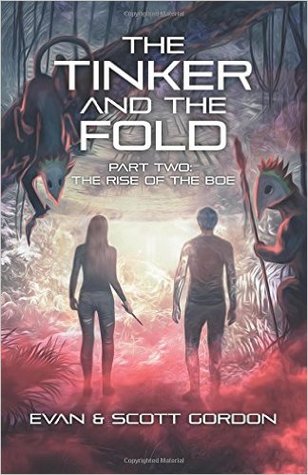 The Rise of the Boe is is the second book in The Tinker and the Fold series by father and son team Evan and Scott Gordon.  This scifi adventure is meant for middle school and young adult readers. There will be some spoilers in this review on the first book, so if you’re planning on reading this series, you might want to skip to the first review.

At the end of The Problem with Solaris 3,  Jett – our brilliant, young, intergalactic traveler – has managed to strike a deal with the Fold, thereby allowing Earth to avoid being neutralized. Jett had inadvertently discovered a means for intergalactic travel through his molecular swapper machine (teleporter) and this, in turn, alerted the ‘guardians of the galaxy’ (I couldn’t help it) known as the Fold of the potential threat the universe now faced with the possibility of Solaris (Earth) humans spreading war and death. Instead of neutralizing Earth, the Fold has agreed to intervene and remove the worst offenders from the plant, the murderers, to a rehabilitation colony on Pluto.

The problem is, the Aaptuuans do not consider killing in the name of defense to be arguably permitted. All murder breaks their rules, and Jett’s father, a good man, vanishes along with prison inmates, military heroes, veterans, and otherwise good people. The vile and honorable are gone.

At the beginning of The Rise of the Boe, we see human civilization a year down the line, after Aaptuuan intervention. For the most part, life is better for all. Everyone is doing their best to follow the ten commandments, the hungry are fed, the poor are taken care of, there is no crime, and there are no borders. It is finally a free planet. But some people are missing their loved ones, especially Jett.

Not knowing what they are doing to his father, he makes the decision to rescue him – this time bringing along his brother and military base friend Abcde. He builds another swapper with plans to port to the colony on Pluto, but something goes wrong and they don’t quite make it. Instead they are sent directly to the Aaptuun home planet as a preventative measure against any who would try to break into the colony. Because the Aaptuuans didn’t anticipate so many to port at once, not all of them make it in one piece.

While the best doctors in the known universe try to fix Jett, his brother is deceived by an Aaptuuan prisoner and taken hostage. It’s up to Jett and his new superpowers, Abcde and her existing powers, an AI named Bob, Aaptuuan gadgets galore, and some trickery on a primitive planet to rescue his brother and bring them home safely. It’s not going to be easy. In fact, it just might not happen at all.

I love the Return of the Jedi influence, intended or otherwise. As you may recall, the tribe of Ewoks on Endor marvel at C-3PO and consider him some sort of deity. This was used to the advantage of the rebels. The primitive fighting skills of the Ewoks were hilarious and it was fun to watch when winning, horrifically sad when they perished. These are all very similar details in The Rise of the Boe without it being a retelling, keeping a distinct and unique story line.

In all, a great start to this young adult series: an adventure laden with courage, honor, and family devotion wrapped up in a space-faring odyssey.

The Rise of the Boe
by Evan Gordon and Scott Gordon