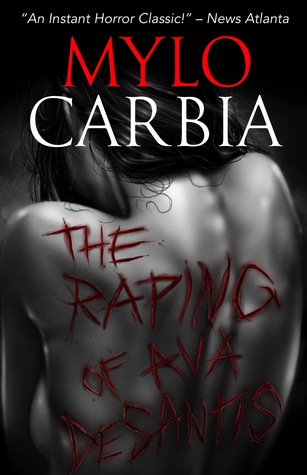 The Raping of Ava DeSantis debuted as the number one new horror when it was released on October 13th of this year. It is the first novel from Mylo Carbia, a ghostwriter for Hollywood horror flicks who has earned the name in certain circles as “The Queen of Horror”. It’s fairly evident from the title, but be advised this book contains graphic descriptions of violence and nonconsensual sex, as well as graphic consensual sex scenes. Rockefeller Publishing Group, Inc. | October 13, 2015 | Paperback | 418pp

Taking place in the fictional setting of Anniston University in Atlanta, Georgia, Ava DeSantis is a smart New Jersey girl in a world of southern good ol’ boys and old money. Although she doesn’t quite belong and she’s not a card-carrying member of the ‘club’, her grades earned her a nice scholarship that she couldn’t pass up. When Wesley Scarborough, a handsome and wealthy frat boy at Anniston, notices her impossible grade-A from the hardest teacher at school, he’s determined to get to know her. And when they meet, sparks fly in both directions.

Ava, confused but curious, agrees to meet Wesley and become his tutor. Their first meeting becomes cramped when Wesley’s fraternity brothers, Sebastian and David, join the party. Although Wesley likes Ava, his brothers show their disdain for her appearance and obvious lack of family money. Too much alcohol is consumed and too many drugs are taken, and Ava is brutally raped by all – even Wesley.

When Wesley realizes what he’s done in an early afternoon of hungover remorse, he tries to save the battered and beaten Ava, and his own skin. His mother, a powerful ‘Atlantan’ defense attorney, makes Ava and her father an indecent proposal while Ava is recovering in the hospital. Say nothing and they’ll get a million dollars. They accept, the boys are saved, and Ava goes away.

Ava comes back to Atlanta and she’s a changed woman, an inadvertent result of Wesley’s mother’s choice to also pick up the hospital and plastic surgery bills, an added bonus to the million for keeping quiet post-rape. She’s also filthy rich. One by one, Ava stalks her prey, and the now-older fraternity brothers don’t stand a chance.

Although I’m not big on heavy sex scenes or any kind of erotica (no, Fifty Shades, just no), I just couldn’t resist this book and its plot description. Revenge is always a great starting point. Author Mylo Carbia feels the same and with this quote, I can’t help but wonder who did the author wrong. Is there a story here?

“No amount of therapy can replace the joy of revenge writing.”
– Mylo Carbia, All Indie Magazine, 2014

Amid some thin character development and a predictable sequence of events, some entertaining features keep the reader glued to the pages. It’s a total page turner; I drove through this read in twenty-four hours. I really couldn’t put it down and found myself sneaking away from the kids to read it in the bathroom, tiptoeing away like I had a dirty little secret to hide. I guess I actually did. The entertainment is definitely there. And in the end you’ll find a plot twist that I have to admit – I didn’t see coming.

Ava should be the central character but instead this novel revolves around Wesley. As a strong female protagonist who comes back to bring a world of pain down upon her attackers, her backstory should have been stronger. The reader wants to know more about Ava and what happened to her for the last fifteen years rather than the brief summary that we got. Screw Wesley and his state of being; we want to know about Ava. She should have been the main character or at the very least had a role equivalent to Wesley. This could have been easily achieved while still keeping the twist a surprise.

On one hand, Mylo is making the main character feel isolated (to the reader) by negating any reader attachment to his antagonist, attachment usually done through character development and backstory. But HIS antagonist is OUR protagonist. That’s why it’s a little frustrating.

The consensual sex scenes are a little cheesy with an industrial leather-n-whip feel: The Matrix meets Basic Instinct. Take it with a grain of salt. There’s no shortage of fetishists or soccer moms who will gravitate to this naughtiness (as if the success of Fifty Shades of Grey didn’t teach you anything…).

Bottom line: The Raping of Ava DeSantis is a riveting read that is undeniably impossible to put down and really gives the reader a solid bit of entertainment along with an unexpected twist. Ladies, get ready to pump your fists in the air and cheer for a feminine phantom who delivers gory vengeance to her rapists.

This is an 18+ read with mature themes.

The Raping of Ava DeSantis
by Mylo Carbia