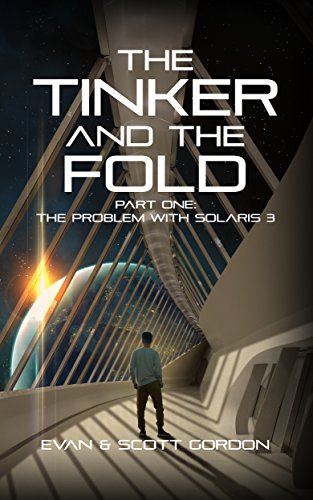 Problem with Solaris 3 is the first book in The Tinker and the Fold series by Evan and Scott Gordon, a father and son duo. I was intrigued by the reviews from Kirkus and California Bookwatch, and even more curious when I discovered that Evan (the son) is only in middle school. Could we have another Christopher Paolini (author of the Inheritance Cycle) on our hands? In this science-fiction series, the day of reckoning is upon us but judgment comes by way of aliens rather than a biblical God. Laguna Lantern Publishing Company | May, 2015 | Paperback | 244 pp

Jett Javelin is a little too smart for his own good. He’s a tinkerer who’s filled his room with gadgets and gizmos of his own creation. But his latest invention, a quantum swapper (teleportation device) based on his mother’s physics notes, is about to change the world – and possibly not for the better. After his first successful test, he caught the attention of intergalactic monitors. After an accident following the second test, Jett is kidnapped by an alien species.

The two Aaptuuan creatures who have abducted Jett are calm and friendly, but they don’t give Jett any options. He’s taken to their planet to meet with a council. It turns out that Earth, known throughout the Fold as Solaris 3, is not ready for interstellar travel and Jett’s invention could give Earthlings this very capability. The Fold is an intergalactic society made up of thousands of alien species and civilizations, but to win entry, humanity must have evolved past greed, war, hate – and we’re not quite there yet. When a non-approved species gains technology that allows them to conquer other planets and spread their negative ways, the Fold intervenes. Because Jett has created technology that is too advanced for Earth’s civilization, the Aaptuuans are considering neutralizing the planet.

The fate of the world hangs on Jett’s shoulders, and that’s not an easy place to be for any young teenager. Desperate to warn Earth, Jett tries to get home and ends up on a forgotten planet with another alien creature who has his own story to tell involving his home planet, the wrath of the Fold, and an ark carrying all the knowledge of his species. Together, they help each other evade Aaptuuan detection and get home.

Problem with Solaris 3 is a wondrously vivid and creative read for young teens with a light tie-in to the Judeo-Christian story of Moses – specifically, the ten commandments. In this world,  humanity was provided with stone tablets that listed the ten commandments, and they had been given to us by the Aaptuuans. If we continue to abide by these laws, and evolve with compassion and love, we would have a chance to enter the Fold generations down the road. But humanity hasn’t followed the rules.

Jett’s faced-paced journey brings the reader into first contact with the “Greys”, metal cocoon space travel, a talking room named Bob, giant worms, tentacled aliens with beaks, fuzzy and adorable (but acid-spitting) bush bunnies, bouncing rocks with teeth, giant crab monsters, giant worms, and the President of the United States.  It’s a fantastic journey with a clever obstacle. The antagonist in this case isn’t the Dark Side with a Death Star but the existing faults of the human condition. The Fold and the Aaptuuans aren’t your typical representations of evil but quite the opposite as they work to protect other worlds from evil.

The end, which won’t be revealed here in detail, is something we’ve probably all thought about as children and adults: what if we just took all the bad people and…..

Problem with Solaris 3 is a high-concept scifi adventure for young teens (and old teens, and adults, and old adults) that is highly recommended. Thoroughly satiated, I’ve picked up book two in the series: The Rise of the Boe.

Problem with Solaris 3
by Evan Gordon and Scott Gordon