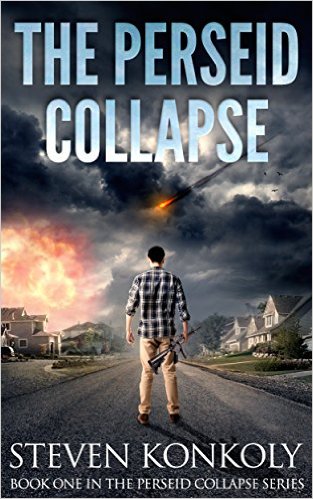 The Perseid Collapse, written by Steven Konkoly, is an action packed thriller, guaranteed to keep you on the edge of your seat. This novel takes place in the New England states of Maine, New Hampshire, and Massachusetts. Personally, I tend to gravitate away from some fiction novels because they can be so unrealistic. However, The Perseid Collapse novel is written so well using real locations, real military terminology, and real emotions that it reads more like a non-fiction book. I currently live in area of Portland, Maine and Konkoly accurately describes this area, making the story much more believable.

The author introduces the main characters on an early summer morning, off the coast of Jewels Island; where Alex and his family are on a leisurely boating trip. Then suddenly, the sky turns a dark red color and simultaneously fries nearly all electronics and vehicles. With their daughter Emily and nephew Ethan sleeping below deck, their son Ryan away at college in Boston, Alex and his wife Kate try to figure out what just happened. Was it a nuke, an asteroid, or something else entirely?

Minutes later, a blast of wind topples trees like toothpicks and nearly capsizes the boat.

“Get below!” he yelled. “Now!” Through the clear vinyl window of the dodger, he saw the leading edge of a powerful blast wave explode through the trees. He pushed Kate down the stairs and ducked his head below the cabin overhead moments before a dark wave of rocks and tree limbs pounded the sailboat. The boat lurched sideways with the initial blast, knocking Alex into the galley, where he tumbled to the deck and smashed his elbow against the counter. Within seconds, the debris shower abated, leaving them in absolute silence.”

Scared but alive Alex and Kate know what’s coming next- a tsunami. With the teens awake the four prepare for the inevitable tsunami and hang on for dear life. They wait for the massive wall of water to hit the shore then decide to attempt to make their way home to Scarborough, Maine.

Former-Marine Alex, knows the dangers he and his family may face on their trip home. He also knows that somehow he must travel to Boston to find his son. After the 2013 flu pandemic (connected in the prior series) Alex used his military survival training to prepare in case another catastrophic event were to happen again. Unfortunately, society does not seem to be as prepared as Alex for such an event.

Konkoly causes the reader to stop and think about the possibility of something like this happening in our lifetime. The Perseid Collapse explores man’s ability or inability to deal with catastrophe on many different levels. This novel is the first book in a series and leaves the reader wanting more. When this novel ended I just had to know what happens next. Does society crumble, does Alex find his son, was it a nuclear bomb? I had all these nagging unanswered questions. So, within minutes I downloaded the second book in the series, Event Horizon. (which I am currently reading it now)

As I read this novel, I couldn’t help but to imagine what I would do if this happened. What would our technology dependent country do without electricity, the internet, our cell phones, our tablets, and our transportation? With climate change, countries at war, possible asteroids, and such there is a slight chance that an apocalyptic event could happen, one day. So, if it happened tomorrow what would you do?


The Perseid Collapse
by Steven Konkoly