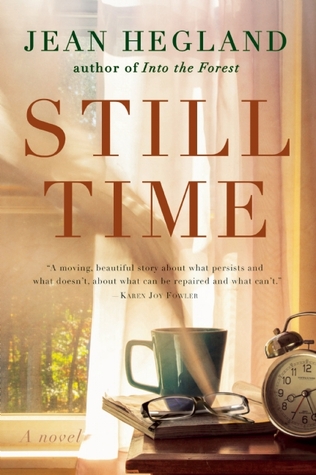 Jean Hegland, the author of several books including Into the Forest, a personal favorite of mine, has put forth a new novel expected out in just a few days. I jumped at the opportunity for an advance look at Still Time, a contemporary novel of an academic struggling through Alzheimer’s Disease and his deteriorating memories of the Shakespeare he loves so much. Arcade Publishing | Hardcover | September 1, 2015 | 240pp

Still Time begins as John Wilson’s fourth wife has no choice but to put him in a nursing home. She’s exhausted and it has come to the point where she can’t even leave him at home by himself. Confronting him with tears in her eyes, he is moved by her visible pain but doesn’t truly comprehend the problem. Knowing that she’s upset he seeks to comfort her the only way he knows how, with Shakespearean prose  – mixed and matched to fit the occasion.

“I will be the pattern of all patience,” he promises. Patting her hand, he vows, “I will endure.”

John has a daughter, Miranda, from his second wife and it’s been ten years since they last saw each other. When she was seventeen, she had accompanied John and his third wife to London where John was ready to give the speech of his life, presenting his views on Shakespeare to his academic contemporaries. Miranda vanished the night before which left John as a sleep-deprived, emotionally distraught vessel of a man, and he blew his speech. When she turned up, he promptly sent her home and the rift between them grew wider with time.

In the nursing home, John has a difficult time as his memories cascade from one point in time to another. He believes he has important work to tend to and he can’t understand how to get home. He reflects on his life, his four wives, the disappointing turn of events with his daughter and his ruined speech in London, and most of all Shakespeare and how he came to be obsessed with the man and his work.

“But his English prof at Davis had talked of William Shakespeare as if he were Clark Gable, Winston Churchill, Groucho Marx, and Jesus all combined. Myriad-minded Shakespeare, he’d call him, and everything they read, from “On Dover Beach” to The Grapes of Wrath seemed to lead back to Shakespeare in one way or another.”

His daughter Miranda comes to visit, seeing her father for the first time in many years. Then she comes back several more times. It is as frustrating for John as it is for Miranda. He can’t remember her and when he does, he spouts angry passages from Shakespeare at her. Miranda never grew to love Shakespeare the way he did, and she doesn’t understand. Still, she has matured from her teen years and so, she tries to mend the rift between them.

Just as Into the Forest, Jean Hegland haunts yet again in Still Time. The depiction of an incredibly intelligent man struggling with the loss of his memories and his inability to understand the world around him is a fate that many will indeed find haunting because of its terrifying possibility – this could be me someday. His desire to leave the facility, the desire for his work, the need for someone to help him – he can’t be satiated.

“It’s more like he can’t keep anything straight, or find the right thought when he needs it. I keep thinking his mind is like a broken necklace – some beads are lost forever while the rest are just scattered everywhere.”

While John reminisces about everything from childhood to his last wife, he brings in thoughts and passages from Shakespeare, incorporating them into his emotions to describe certain events. From the way he disappointed his father to the way he let his daughter down. Toward the end, memorized passages trigger feelings that he can’t understand, yet it helps him.

“I did her wrong. Such a simple declaration. Four words, four syllables, two simple iambs – and yet that little sentence comes near to skewering him, such a painful puzzle he gladly lets his thoughts veer elsewhere.”

Still Time is a highly evocative read, managing to strike with pinpoint accuracy at several raw emotions. It’s also a wonderfully intelligent read and Jean deftly weaves in characters and prose from Shakespeare’s greatest, expertly creating connections between these references and John’s deteriorating thoughts. It gives the reader the chance to revisit brief sections of Shakespeare and experience them through the mind of a lifelong Shakespearean academic.

Shakespeare on the Mind

Full of emotion and deep reflection, Still Time is a beautifully created story of memories as they twist in turn in the deteriorating mind of a professor, from personal memories to Shakespeare.