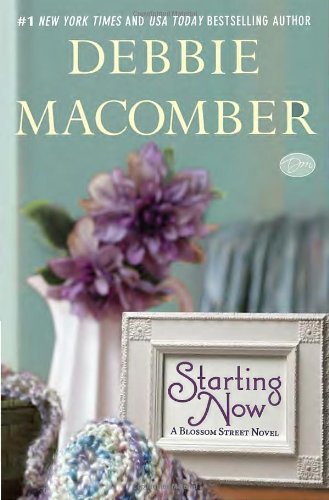 Starting Now by Debbie Macomber is a the 9th book in the Blossom Street series.  When Libby Morgan lost her job in a law firm after expecting to become partner, a lot of things seemed to change. Libby was always engrossed in her job.  Her first marriage to a man named Joe ended up failing because of her lack of desire to start a family with Joe.  She was very career-oriented and wanted to wait.  She never saw herself being a mother.  However, when she gets laid off from her position at the firm, her boss gives her some advice: “get a life.”  He doesn’t want her to end up like him and focus solely on work. At that point, Libby is so mad that she has just lost her job that she cannot believe what her boss is telling her.  All she really knows is how to work hard at a career.

Libby is out of work for a few months when she goes into a yarn store with her friend Robin who needs to buy her mother some yarn.  Libby figures she has time to do some knitting and the owner of the store tells Libby that she gives discounts on yarn bought to make baby hats. The baby hats are then donated to a hospital.  When Libby donates the hats she has made to the hospital, she gets more than she bargains for.  Two young girls, Ava and Casey, assist Libby with dropping off the donations.  When a dreamy doctor whom Libby recognizes from the gym gives her some very interesting information, it changes her relationship with the girls as well as the doctor.

The book teaches you to make time for things other than work.  Family and friends are really important to have throughout the struggles and achievements of your life and Debbie Macomber portrays this really well through Starting Now.

I picked this book up for an easy read. I did not realize this was part of a series until I looked at it a bit more.  However, I did not feel as if any of the other stories had to be read previous to this book.  She made sure to tie everything up nicely and answer any questions by the end of the book.  I do want to read more of the series now though!