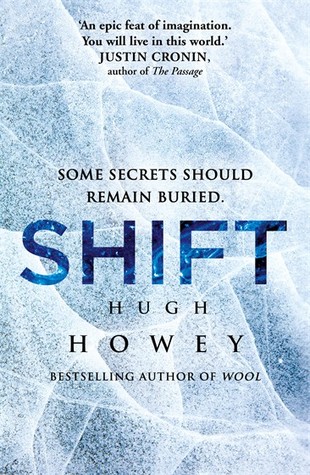 The Silo series by Hugh Howey is a collection of novellas which were initially self-published.  Mr. Howey is one of the great self-published success stories.  After gaining popularity quickly, he combined the first five novellas into one massive tome:  Wool Omnibus.  And when Wool fever hit (and it hit hard), the distribution rights to Mr. Howey’s self-published book series were purchased by a number of mainstream publishers.  Wool Omnibus is still holding a firm position within my personal list of all-time favorite books. Shift (Silo #2) | Createspace | Paperback | January, 2013 | 603 pp  (I managed to get one of the original self-published versions!)

In Wool Omnibus, the remaining vestige of human civilization lives in an enormous underground silo, a facility so large that it takes people days to reach the bottom from the very top.  The outside world could be seen on screens in the top-level cafe and it was a depressing view of a barren and deadly wasteland.  There was one rule that would cause immediate expulsion and ultimate death: never say ‘I want to go outside’. Because that’s exactly what will happen.  The doomed offenders would be sent outside to “clean” the sensors with a pad of wool, and the dangerous atmosphere would kill them quickly afterward.

In this next set of novellas entitled Shift, Howey takes the reader back to the creation of the silos and the event which drove scores of people underground.

It all begins with Congressman Donald Keene and Senator Thurman.  The senator is the one who got Donald elected and now he wants Donald to help on a top-secret project.  On a selected parcel of land in Georgia, Thurman tasks Donald with building a giant silo to house a thousand people deep underground in case of an emergency.  It’s not like Donald can say no, but the pressing urgency coupled with the need for secrecy is not only baffling, it’s downright scary.  Even odder still is the fact that there are 49 other silos being built on the same tract of land, but Donald is only privy to the completion of one: Silo #1.

The setting isn’t too far into the future, but far enough for a glimpse of some great scifi gadgetry. Nanotechnology is in play and tiny, microscopic robots go where surgeon hands cannot for cellular repair. Senator Thurman is an older gentleman, but he hardly looks the part thanks to medical nanotechnology.  It is this very same technology that poses a very real threat to human civilization, and Thurman has inside information on the ‘how, when and why’.

Donald is kept out of the loop for the most part until the day of the Democratic convention when the magnificent silos are revealed to the public.  At the height of the celebration, and at the end of the national anthem, the bombs really did go “bursting in air”.  Mass panic ensues, but guards are there to usher everyone into the safety of the silos.

Not only is nanotechnology accountable for silo life, a combination of existing new technology (existing in the book, that is) and a set of rules called “The Order” assures silo life complacency and a manageable society.  A drug had been developed for those who suffer from depression – it helps them forget.  With this new drug in the water, people can forget about their old lives and those they lost, allowing them to move on with a new life in the silo.  The rules of “The Order” pave the way for a new type of society and help keep the peace, some of which are the very same rules we witnessed in Wool Omnibus.

While life in forty-nine silos cycle through generations of life and death, it is Silo One that acts as overseer and maintains a slightly different routine.  Those in charge, including Donald and Thurman, are put into deep-freeze to be awoken at certain intervals, while all women and children are put into deep-freeze until the end (enter the patriarchy!).  The ‘men-only’ (because women are a distraction – what?) take ‘shifts’, waking up fifty or more years later to help run the facility and help manage other silos.  The goal is to make it to the end, five hundred years into the future, when the atmosphere will once again be able to sustain life and the silos can be opened.

Shift takes us through each of Donald’s shifts, up to the very point where we left off in Wool Omnibus, when one of the cleaners (Juliette) walked over the hill and disappeared.  While Donald is trying to deal with the imminent downfall of Silo Eighteen, he pieces together some important information that Thurman wants kept secret.  When Wool Omnibus left us with those “OMG! NO WAY!” moments after each novella, Shift does the same at the very end.

This is an incredibly detailed, vast dystopia that begs to be raved about.  The rules, the silent suffering, the society, the different levels of the silo and their functions, the tough decisions and the maddening control that one silo has over the others – and that control is just an echo from the past.  A past that put them into these silos.

What made Wool Omnibus so great was the symbolism of the stairs.  They meant something different to each person as well as the descent or ascent while traveling the stairs – it was undeniably poetic.  This same symbolism occurs in Shift but to a lesser extent.  The stairs are pushed aside since Silo One has an operating lift for those on shift, and instead we find symbolism in power and those who have the ability to wield it, those who preside over life and death.

It all boils down to conflicting ideals: the need to wipe away all knowledge of former human civilization so that humanity won’t make the same mistake, or the right to remember and learn from those mistakes.

The crisis which lands human civilization in this scenario is undeniably spooky because of its very real possibility.  It’s detailed, specific and so logical that it’ll make you want to build your own bunker – just in case.  Think of: the speed of technological advancement, possible dangers, and ‘wrong hands’. Enough said.

While Wool Omnibus remains my favorite in the series, Shift answers all of the questions that were posed in the first book.  Although I wasn’t happy about the obvious sexism and the need to ‘put women away’, I’m trying to see this as an extension of the antagonist rather than one of the author.  Regardless, I’m definitely looking forward to Dust (Silo #3) – I can’t wait to see where Howey takes us from here.

He did it again!

I'm rattled by Hugh Howey's ability to devastate and surprise me. Once again I found myself screaming while reading.