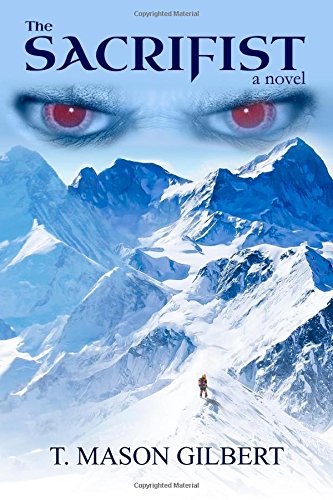 Some people believe in creatures living among us on earth that have yet to be discovered by man. One undiscovered creature that has been the subject of many books, movies, and reality television shows is the Yeti, a member of the Bigfoot family. The Sacrifist is the first book of a three part series, written by T. Mason Gilbert that is intertwined with bits of authentic Yeti Tibetan Buddhism legend. In fact, according to legend the first ever reported Yeti sighting occurred on Mt. Kangchenjunga, the main setting of this novel. Mt. Kangchenjunga is the world’s third highest mountain, found on the Nepal-Sikkim border. With the size of the mountain one could see there being a possibility of a creature like the Yeti existing without ever being found. Even though the book is clearly fiction Gilbert plays upon our natural curiosities regarding the legendary Yeti.

Dane Nielson, the main character, is an expert mountain climber who is hired to find Sir Randolph’s son Randolph Jr, who goes missing while climbing Mt. Kangchenjunga. Rumors surround Randolph Jr.’s disappearance, as he is an experienced climber who mysteriously vanishes leaving only blood-stained snow behind. The rumors involve a killer Yeti, snapping human bones like twigs and feasting devilishly upon human flesh. This is a rumor in which Dane does not believe so he allows his fiancée and his friend to accompany him on the search. Shortly after the search begins Danes beliefs and life are turned violently upside down. Then after a brief recuperation away from Mt. Kangchenjunga Dane returns in search of Randolph Jr. and this time to kill a man-eating Yeti.

Meanwhile, there is another person, Dzangbu Lingpa, on Mt. Kangchenjunga searching for the same Yeti but for a completely different reason. The reason is not revealed until nearly the end of the book; leaving the reader guessing Dzangbu’s true motive for his search of the man-eating Yeti. Dzangbu Lingpa is in the Nyingmapa sect of Tibetan Buddhism and is a kind of yogi called a Sacrifist. I had never heard the term sacrifist before and can only describe it as a person of boundless faith, in Tibetan Buddhism, who is similar to a ‘chosen’ one.  Both Dane and Dzangbu are in pursuit of the same Yeti on the same mountain and the reader follows them both on their respective journeys.

I really enjoyed this fictional novel however; the reader should be made aware of a few things before they begin reading. First, there are a lot of different characters in The Sacrifist so I suggest the reader takes their time reading to really absorb and remember them all. Also, the author speaks in the first-person point of view at times, from several of the different character’s voices. This is an additional reason to read the book carefully otherwise you will not know who is narrating. Lastly, this book contains a large amount of exceptionally written graphic, bloody, violent scenes, which many great fictional books do. However, if bloody gory violence is not your thing you have been warned. For everyone else this is a suspenseful read that will keep you guessing, keeping you on the edge of your seat until the very end. I am beyond excited to read the next novel in this trilogy.


The Sacrifist
by T. Mason Gilbert