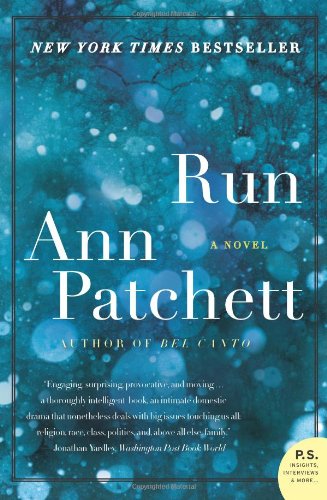 Run by bestselling author Ann Patchett is the Portsmouth Book Club’s June pick. Published in 2007, this was the first time I’d heard of this book and it was my first introduction to Ann Patchett (hey – I usually wade around in scifi whirlpools). For you local readers, this book takes place in Boston and Cambridge. Formerly hailing from Cambridge (for a short period in my life, anyhow), I cherished the descriptions of familiar landmarks. Hardcover | HarperCollins | January 1, 2007 | 304pp

Bernard Doyle is an Irish descendant and the former mayor of Boston. Widowed when his boys were young, Bernard eventually left his chair in disgrace after an accident involving his oldest boy, Sullivan. His eldest was a bit of a disappointment to Bernard, mostly because he didn’t behave as the prodigal son – meaning, he didn’t follow in Daddy’s footsteps, avoiding the world of politics altogether. But Bernard had two more chances before his wife left his world; they had adopted two African-American boys, brothers by blood. These boys whom he loved overwhelmingly, also failed to share his passion.

“As for Sullivan,  he just thought the whole thing was hysterical. He saw Tip’s work not as a legitimate scientific pursuit but as some enormous, cosmic cruelty leveled against Doyle [Bernard] for his desire to steer his smartest son into politics.”

Tip is the “smart one”. Tip Doyle has a passion for fish, and whether Bernard likes it or not Tip got it from his father. He’s a brilliant young man who studies ichthyology at Harvard. Teddy is the “sweet one”. Indoctrinated by the Catholic Church, Teddy works side by side with his Uncle Sullivan, a recently famous priest.

The main story begins after a political lecture given by Reverend Jesse Jackson. Bernard Doyle and his two adopted sons are having an argument outside the lecture hall. Neither one wants to continue going to these events, much to Bernard’s chagrin. They love their father, but they just don’t share the same interests. Their lives are changed in one tiny moment, when Tip steps off the curb and into the street; he doesn’t see the car coming through the snow. But Tennessee Alice Moser does.

This unknown woman careens out of nowhere and pushes Tip out of the way only to get slammed by the SUV. She leaves her young daughter on the sidewalk startled, alone, and frightened.

Tip is injured and the woman who saved him is seriously hurt. She is taken to the hospital by ambulance which left Bernard, Tip, and Teddy unsure of what to do with this young girl who was left behind. When she finally asks them one startling question, a question that turns their world upside down, they decide to take her with them.

The main story line of the book takes place within twenty-four hours, using flashbacks of the boys’ childhoods, their late adoptive mother, and Tennessee Alice Moser’s life before the accident to create character complexities. What we see is a tender story of families that had been created not with blood, but with love. That creation is also ongoing, it is perpetual, and it is not linear but crisscrossed with accidents and unexpected events. This part of the story is enforced through a tender short story in the beginning of the book about a small figurine that had been handed down for generations. It is supposed to go to the daughter who most resembled the red-headed Mother Mary statue, but in Bernard’s family, and to the anger of his wife’s sisters, that statue is going to go to one of his African-American boys.

Divine intervention and racism (sort of a strange mix) have strong undertones in this book. Uncle Sullivan (Bernard’s brother) is an old priest who had recently been gifted with the power to heal.  Word of his miracles have traveled fast and people are lining up to see him. When he visits the hospital at the behest of Teddy and lays his hands upon Tennessee, something happens.

The racism brought to light isn’t new, but it is disturbing. It’s the little things you wouldn’t necessarily think about. It’s the little black girl who the paramedics and police left behind after they took her mother away in the ambulance. It’s the fact that they didn’t ask about what to do with her, because there were two black boys there who ‘must’ have been her family. It’s the fact that while in the hospital, Bernard frets about taking the girl home because it would be illegal since they weren’t family, but the boys tell him that no one will care because at least they were black, so no one would say anything or even care to say anything – they would just assume ‘family’. And so they did, and no one said anything. It’s about the gentrification of the South End, and the way that Tennessee Moser Alice became Tennessee Moser Alice with a little girl. And it’s the difference between Bernard Doyle’s comfortable way of life compared to the projects just a few blocks down where Tennessee and her daughter lived.

All in all, this is a really good book.  I wasn’t terribly moved as I didn’t feel a strong connection with any of the characters.  But man, can that girl run.