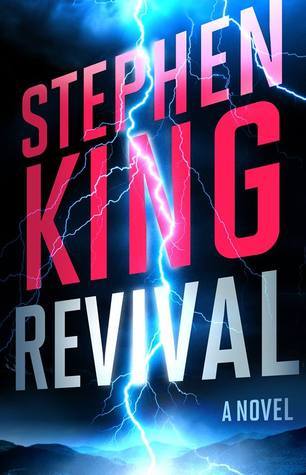 It all comes down to one moment in this book, one moment I desperately want to share but cannot by virtue of the unspoken honor code for book readers – thou shalt not give away the ending.  I’m merely tempted because of the hellish dreamscape stuck in my head, one that I feel the need to vent before I cry myself to sleep.  Stephen King does what he does best in his latest novel: Revival.  Scribner | Hardcover | November, 2014 | 405 pp

It was October of 1962 when young Jamie Morton looked up from his army set of playthings to see Reverend Charles Jacobs, the new minister of the local church in their small Maine town.  Jamie liked the new minister instantly, and so did everyone else.  His Sunday services were pleasing and the congregants gave him their approval.  His wife and son were also adored.  And during the weekly youth meetings, Rev. Jacobs dazzled the younger ones with displays of electricity – a hobby of his and a way to demonstrate that power is finite, but God’s true power is infinite.

Not long after Reverend Jacobs arrived, his wife and son were killed in a horrific car crash.  Jacobs was inconsolable.  After giving a horrendous sermon on the first Sunday back at the pulpit, dubbed and forever remembered as “The Terrible Sermon”, Jacobs left town for good, breaking Jamie Morton’s heart and changing his beliefs forever.

Jamie grew up, picked up the guitar, played in a band, and fell in love.  Eventually he left the area and grew apart from his first love and then began touring with bands.  His next affair was with heroin.  Down on his luck, Jamie Morton bumps into Reverend Jacobs again, but in a carnival instead of a church.  Jacobs was once again dazzling people with the power of electricity.  Even though he hadn’t seen Jamie since he was a child, Jacobs recognizes him instantly, and knows a drug addict when he sees one as well.

Rev. Jacobs once miraculously healed Jamie’s older brother with some electronic gizmo, giving back to his brother the power of speech.  He said he could heal Jamie of his drug addiction the same way.  No, it wasn’t God’s work, he said.  It was something different.  Besides, Reverend Jacobs was no longer a believer, and he wasn’t a reverend anymore.  He put a headset on Jamie, turned on the power, and Jamie blacked out. When he came to, Jamie no longer craved heroin – but other things were different, too.

Jamie was cured and he moved on to a better lifestyle.  But whatever cure Reverend Jacobs had administered left a negative impression in other ways.  He had nightmares, walked in his sleep, and suffered from periods of blackouts and self-mutilation.  These terrifying aftereffects eventually subsided, until he meets up with Jacobs again years later.  Only then would he come to learn of Jacob’s obsession, the scores of people he had “healed” for the sake of study and practice, and his ultimate goal to wield a power that no one had ever been able to control.

“That is not dead which can eternal lie, And with strange aeons, even death may die.”

Jamie Morton tells the story of his life as the narrator, spanning five decades of memory.  Whether or not he is the ‘unreliable narrator’ hinted at by his final location and vantage point, that’s up to the reader to decide.  Hey – if it lets you sleep at night … believe what you want.

“But writing is a wonderful and terrible thing.  It opens deep wells of memory that were previously capped.”

What is wonderful about the majority of this tale, aside from the trundling creepy-crawlies that edge up your spine, is Jamie’s coming-of-age story.  King combines his wondrous powers to psychologically disturb with a believable and hearty story of one man’s life.  My favorite part is Jamie’s adolescent years and his courtship with a first love.

And then there is Reverend Charles Jacobs.  In his memoir, Jamie refers to Jacobs as his ‘fifth business’. He explains that in movies, the ‘fifth business’, also called the ‘change agent’, is inserted by the screenwriters to play a specific purpose and alter the life of the protagonist.  Jacobs begins as the good guy, and he probably was until the accident that took his wife and son.  And although he eventually takes on the role of ‘mad scientist’, I saw him not as the antagonist, but rather the conduit between protagonist and true antagonist.  All Jamie can see is: ‘fifth business’ – and that is antagonistic enough.

“When I think of Charles Jacobs – my fifth business, my change agent, my nemesis – I can’t bear to believe his presence in my life had anything to do with fate.  It would mean that all these terrible things – these horrors – were meant to happen.  If that is so, then there is no such thing as light, and our belief in it is a foolish illusion.  If that is so, we live in darkness like animals in a burrow, or ants deep in their hill. And not alone.”

That end – it is the climax that will leave you speechless.  Those with vivid imaginations be forewarned! He describes that stuff which nightmares are made of.