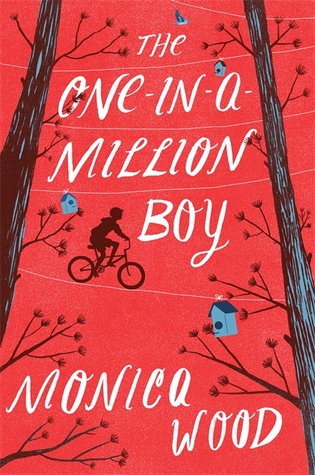 Set in Maine and extending through New Hampshire and into Vermont, The One-in-a-Million Boy is a contemporary novel that focuses on a short but unique bond between a young boy and a feisty centenarian, parental grief, and new horizons.  Thus far, it has been published in eighteen different languages. You can read about local Maine author Monica Wood on her website. Headline Review | April, 2016 | Hardcover | 416 pp

Ona Vitkus is a 104-year-old woman who receives weekly help from the local Cub Scout troop in the form of one scout dropped off at her house every Saturday. Most of the boys display a typical lack of enthusiasm and she sends them away, until a quirky and eager eleven-year-old boy shows up at her doorstep. He’s an unusual boy with a penchant for memorizing lists and an obsession with Guinness World Records. He’s absolutely fascinated with Ona, and she’s just as taken with “the boy” who remains unnamed throughout the book.

And so begins an unusual companionship – two odd puzzle pieces that fit magically together and nowhere else. Ona is a Lithuanian immigrant and the boy’s presence invokes memory of her mother tongue long forgotten. The boy is fascinated with Ona who provides undivided attention, stories, and her own lists. He is convinced that she could be a record holder and works to help her regain her driver’s licence to run for oldest licensed driver. During his scheduled visits, he also records her life stories on audio using his own list of questions. It is during these sessions when Ona reveals secrets for the first time in her life.

Sometimes he turned off the machine to ask a left-field question – What did your baby look like? – that left her flummoxed and strangely willing as he flicked the machine back on to immortalize her response. His motionless attention had the scrumlike effect of loosening both her tongue and her memory. Sometimes he forgot what was a secret and what wasn’t. Eventually, so did she.

Their time is short and one Saturday, the boy’s father shows up to fill in for his son. The boy had passed away unexpectedly from an undetected genetic heart disorder. The book begins with this first encounter and follows grieving parents who try to understand their son’s relationship with Ms. Ona Vitkus. A barely-there father struggling with guilt finally connects with his son though Ona, and Ona develops a new attachment while indulging the separated couple in their time of healing.

How could it be that Ona Vitkus, after so many years alone, had been netted by the maneuverings of lovers and interlopers, tangled into their grief and envy and clumsy efforts at peace? And oh, weren’t they a show: their puzzling wants, their cross-purposes, their own mundane, ticking-down minutes.

The mother and father have their pros and cons, and we don’t know much beyond the boy’s eccentricities – but the character of old Ms. Vitkus shines brilliantly. After over one hundred years, she has some stories to tell such as casting her first vote illegally and running away with a traveling show. She isn’t a glowing ball of grandmotherly affection and on more than one occasion, she shares sentiments one might find shocking.

“Yes,” Ona said. “I never knew Laurentas and I make no apology for that. It was my Frankie I wanted returned to me, my best and my most beloved.” (speaking of her children)

The death of a child and parental grief are not easy topics for me to read about and I struggled in the beginning. The writing is beautiful, but the emotional toll is deep. Thankfully, The One-in-a-Million Boy starts with the worst and moves on from there. Highly recommended for book clubs.

The One-in-a-Million Boy
by Monica Wood