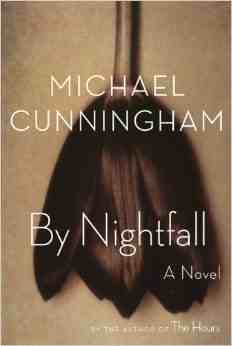 By Nightfall is a contemporary work of fiction by lauded author Michael Cunningham. It is a coming of age tale not only for the younger characters but for the middle-aged main character as well. The story is centered around Peter Harris and his wife Rebecca. Peter is an art dealer in New York City while Rebecca edits an art magazine. They are both middle-aged and living a seemingly happy, fulfilling life. However, their lives are suddenly upended when Rebecca’s younger, troubled brother arrives to stay with them. His name is Ethan, he is willful, young, lost without a sense of direction and a drug addict. Ethan’s arrival causes an instant upheaval to Peter’s life.

Peter is a troubled character from the very start. The first scene involves he and his wife who are on their way to a party. In the cab, they are suddenly arguing about Ethan and Peter is working through ways to appease his wife so they can simply enjoy the evening. We are under the impression that he conceals his emotions constantly to keep his life at a certain balance. Once they arrive home, we then learn he suffers from regular bouts of insomnia.  This also suggests not only health issues but a person who is not directly addressing issues in his life. He is aware of his lack of passion in his life, the day-to-day drag of the same old same old. He simply can’t figure out why. He has an interesting job, a career he used to be passionate about. He has a wife who grants him stability and who is very beautiful (though not as beautiful as when they first met, lamented by Peter himself).

Ethan’s arrival causes Peter to suddenly look at his life very differently. Here is a young man who travels wherever he desires on sudden whims on mostly his parents’ funding. He cannot hold down a job, or stop doing drugs or stop becoming involved with every young man or woman who catches his eye. Peter is looking at his stable, wealthy, fascinating life and suddenly thinking maybe it is not what he really wants. He also has a sudden attraction to Ethan. Is it because Ethan bears a startling resemblance to his wife Rebecca in her younger days? Maybe he is actually gay and has been suppressing it therefore causing his subtle unhappiness in life. Or maybe he is simply drawn to Ethan’s freedom and wandering spirit.

This is a story that explores what are we actually looking for in our lives. What happens when the life we have carefully crafted appears to be falling apart at the seams and making you miserable? Why do we love who we love and what happens when that love and attraction begin to fade? This book attempts to answer these questions of life and it is done beautifully with rich language and a quick moving plot. The ending will leave you shocked but also satisfied. I highly recommend this read.

By Nightfall
by Michael Cunningham