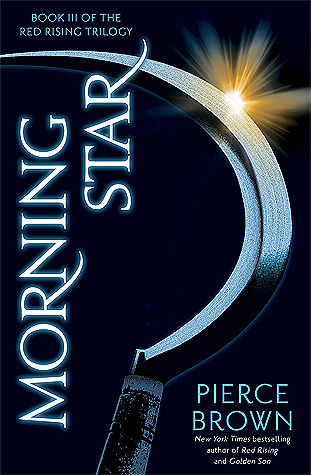 The epic Red Rising trilogy finally concludes with Morning Star and it’s every bit of the gorydamn brilliance we expected, from beginning to end. This adult science-fiction series takes place far into our future where terraforming is the norm and our solar system has been fully colonized. The technological advancements speak of a superior civilization, however – society in general has suffered a backslide into a caste model complete with slavery. Del Rey | Kindle Edition | 2016 | 544 pp

In Red Rising, Darrow the Helldiver lived under the surface of Mars, mining the planet for the gas needed to terraform the planet. For centuries the miners have lived there, doing the work needed to be done for future generations. But they had been lied to. Mars had already been terraformed and colonized. The miners (the Reds – the lowest caste in this color-coded caste society) were being kept as continuous slaves. When Darrow’s wife Eo is executed for singing a simple but defiant song, and Darrow then learns the truth about the surface, he joins up with a rebel team for a big mission. Using specialized medical techniques from the ‘carvers’, they turned him into a Gold (a member of the killer ruling class who are enormous, strong, beautiful, fair, and golden-eyed) for the purpose of infiltrating the Gold Institute. There he excelled and went into the service of Nero au Augustus, the same man who had Eo killed. In Golden Son, Darrow uses the Gold’s house wars to his advantage and causes civil war. His goal from the beginning was to bring everything down and build anew. But in the end he is caught and all of his new Gold friends and followers find out that he a lowRed. His mission was exposed.

Morning Star begins with a new and unrecognizable Darrow – weak and on the verge of giving up. After suffering months of torture, he was stuck in a hole for seven months of solitary where a tube supplied nutrients and removed waste. He had become the face of the revolution and the ruling empress Octavia couldn’t allow hope for his survival to continue, so a fake Darrow had been publicly executed. Most thought he was dead. The rebel group Sons of Ares was losing ground, but a few of Darrow’s old Howlers hadn’t given up. When Darrow was secretly removed from the hole for transport, he was rescued by his old friends, along with Victra – another Gold in confinement.

It takes Darrow time to heal physically and emotionally, but it isn’t long before Darrow is a God of death once again. It was Sevro, the Gold goblin and Howler, who rescues Darrow and much to his surprise, many of his Gold friends and other caste colors are still with him, still behind him. But where is Mustang – his love interest? If she knew he was alive, would she heed the call? Or would her loyalty reside with the Golds and the ruling class? Darrow wonders but he doesn’t have time to look for her. It’s all about firing up the uprising and leading his people to all-out war.

The rebel Sons of Ares have an impressive fleet of captured ships and a huge contingent of fighters from every caste, but they don’t have nearly enough to battle the Gold’s armada. They need more and Darrow has ambitious plans to fulfill both needs. With rumors of his resurrection and the desire to fight against oppression, the lower colors rise up against their golden masters.

“In mine, in space, in city and sky, we have lived our lives in fear. Fear of death. Fear of pain. Today, fear only that we fail. We cannot. We stand upon the edge of darkness holding the lone torch left to man. That torch will not go out. Not while I draw breath. Not while your hearts beat in your chests. Not while our ships yet have menace in them. Let others dream. Let others sing. We chosen few are the fire of our people.” I beat my chest. “We are not Red, not Blue or Gold or Gray or Obsidian. We are humanity. We are the tide. And today we reclaim the lives that have been stolen from us. We build the future we were promised. Guard your hearts. Guard your friends. Follow me through this evil night, and I promise you morning waits on the other side. Until then, break the chains!” I pull my razor from my arm and let it take the shape of my slingBlade. “All ships prepare for battle.”

What began as a journeyman and reluctant hero wanting revenge for the death of his beloved wife snowballed into a catastrophic force of destruction. The Sons of Ares had been around for a while, but it wasn’t until Darrow came along when things began to move. After his carving and when he entered the Institute as a Gold, his goal never wavered, even with the new Gold friends he made. He was strong, fearless, and ultra-competitive. He never betrayed his identity until the end of the second book, and even then – he would still keep going. He wanted it all to burn. He wanted his wife’s death to mean something. Even if meant Mustang (his new love and a Gold) turned from him, he wouldn’t waver. He was a ferocious bringer of death.

In Morning Star, Darrow has softened a bit. But his goal has not changed. Millions have died and millions more will die in this battle, and doubt creeps into his mind – understandably. New deaths in this book strike blood on his mentality (and the reader’s) and betrayal breaks his heart. But Darrow keeps trekking. His path has gone beyond Eo, for surely she wouldn’t have wanted this.

“If you’re watching, Eo, it’s time to close your eyes. The Reaper has come. And he’s brought hell with him.”

The story is deliciously complicated. There are a lot of players in the Red Rising trilogy. The Golds have modeled themselves on Roman society and mythology. There are different houses, alliances, feuds, and connections. Then there are the color-coded castes and what each color represents in terms of societal position. On top of that, there are the learned terms such as slingBlade, Stained, Peerless Scarred, holocube, and a million others. Yet, the story is so entrenching, so engrossing – any reader will be at one with this world.

The best part of these books has been Darrow’s battle maneuvers. The reader is always left to wonder what will happen next, but Darrow always knows. Just as the enemy is surprised with his cunning moves and fake-outs, so is the reader. And the ante has upped in each release. In the first book, Darrow wages war among his peers in the Institute as this was the game and the goal. In the second book, he commands an army for planetary war. But in Morning Star – think Ender’s Game. While no planets are completely destroyed, they do engage in hardcore space battles.

An epic series you can’t miss with a finale that will make your fingers ache from the unavoidable death grip on its pages.