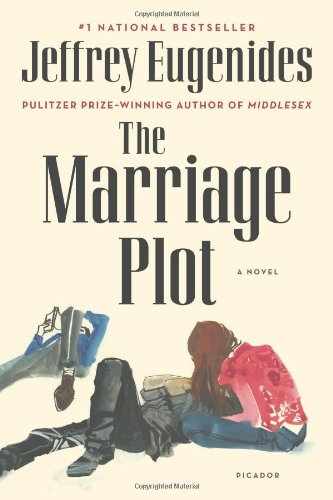 The Marriage Plot is a fiction novel written by Jeffrey Eugenides. It centers around the lives of three characters: Hanna, Leonard and Mitchell. Eugenides explores the themes of love, mental illness, and finding oneself through literature while following each character through life after their college years.

Hanna is the main protagonist, the object of affection for both Leonard and Mitchell. The story begins on the day of the characters’ graduation from college. We discover that Hanna and Mitchell have a tense friendship which is strained by Mitchell’s proclaimed love for Hanna. She is unavailable to Mitchell due to the fact that she is dating, and is in love with, Leonard.

The two men could not be more opposite from each other, linked only by their adoration of Hanna. Mitchell studies religion and spirituality and is concerned with the state of his soul. He is found meditating on the campus lawn hours before the graduation ceremony.  Leonard on the other hand is an eccentric academic, wholly in the physical world and in the beginning of the book we learn he is battling a mental illness – specifically manic depression. She learns of his condition when he is suddenly admitted to the hospital the night before graduation. His illness disrupts Hanna’s wholesome idea of what her future would be after graduation. She had idyllic plans of graduate school and a partner who would likewise pursue higher education while creating a stable, adult future. Hanna’s love for Leonard is persistent and strong and she stays with him through his illness.

Seeing that Hanna and Leonard will be staying together, Mitchell takes off to travel Europe. He visits the usual places including Germany, France and Italy when he stops in India. Here he becomes enthralled with Catholicism and the spirituality surrounding it. He begins volunteering at a shelter for the poor and sick. He transplants his passion for Hanna into his charitable work.

Meanwhile, Hanna and Leonard experience significant bumps as Hanna begins having doubts about her relationship. She is not sure if she is still in love with Leonard or if she is simply afraid to leave him in his weakened state.

The story culminates when the three characters meet again at a party New York City. Eugenides does not wrap the ending up in a nice little bow for the reader, he leaves us with a realistic ending. If you are looking for a modern love story peppered with classic literature references, this is the one to check out.