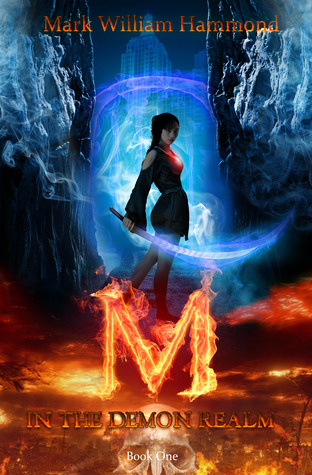 I got the chance to check out Book One in the urban fantasy M Series – M In The Demon Realm by Mark William Hammond. This novella is fast paced and filled with supernatural creatures who break free from hell to invade Manhattan. One reluctant protagonist stands in their way. Createspace | January, 2014 | Paperback | 110 pp

Emma Ricci is a young Korean American with no knowledge of her biological heritage. She was adopted at a young age and brought to America where she now lives in the hustle and bustle of New York City as a young woman trying to make her way in the design industry.

Strange things have been happening in the city and Emma gets caught up in the havoc when she is attacked by a demonic creature. She fends it off but not before it took her boyfriend and left her critically wounded. That’s when Li Bai and Zhan, two elderly men from Chinatown, find Emma and bring her to a safe house.

Emma discovers that she is a descendant from an ancient line of demon hunters and she is the only one who can stop the demon scourge at its very center. What has happened before will happen again and Emma begins to remember her past life and death, destined to be repeated.

M In The Demon Realm is a short book and so there isn’t a lot of character development. When Emma discovers who she really is, she is only given days to train. It does seem a little implausible that she should become this great warrior, going from a meek waitress to a demon hunter wielding a glowing whip-like sword after only a few days. But as I said, it’s a short book.

Given that, the descriptions, character development, and relationships are lacking, and the present tense style of prose is a bit clunky. But that certainly doesn’t deter from the action and main story line.

There are some great facets to the story which speaks highly of a gifted storyteller: the background of an ancient story involving demons and hellgates that open and close over centuries – a story that repeats with the same souls born time and time again, different regions have different demons, a detective who goes from antagonist to reluctant believer, and a hellhound who decides to switch sides.

M In The Demon Realm quickly ramps up to become a read-in-one-sitting nail biter ending with a welcomed portent of more books to come in the series.


M in the Demon Realm
by Mark William Hammond