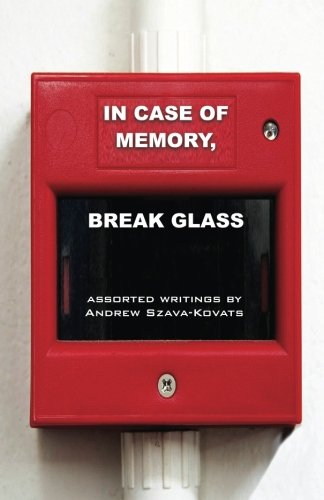 Andrew Szava-Kovats  is a local author from Lowell, MA. Following his debut novel “Death of an Apprentice,” Andrew Szava-Kovats presents a collection of various writings to portray a man lost in his memories. He has lost all sense of “present.” His reality is composed of memories of a past that may or may not be real. From tender moments of teenage love to horrific childhood memories of rape and injury, a full spectrum of life’s experiences in vivid detail, with a dark sense of humor. 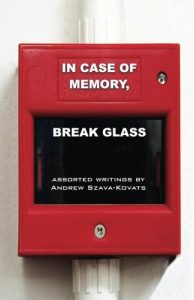 In Case of Memory, Break Glass:

Andrew Szava-Kovats’ ‘In Case of Memory, Break Glass‘ collects a variety of writing forms, including short stories, poems and a play, with a twisted sense of humor, to explore dark memories of rape, near-death experiences, and love affairs. By leaping into different times – from the 1960s to the present day – we get a portrait of a man lost in time.

An exploration of memory, how it works, how it fails, and how it becomes our reality. It’s a non-linear approach to portraying a character who wrestles with his demons from the past: lovers, rapists, family. Meanwhile the “present” is lost, the future a myth.

Reminiscent of Kurt Vonnegut’s “Slaughterhouse Five,” this is another twisted journey through the past. Time becomes fragmented into bits of memory that replay in random order. None of it is real. None of it is false. The recorded, written version of his past is all our hero knows as “reality.” He is lost in his past, wandering through it.

It’s a story of love and loss, family unity and disintegration, aging and dying. Or rather, not so much a story as a hallucinatory trip through experiences and time slices that no longer have a linear thread connecting them.

As the author puts it: “The past is all we have. And yet, memories are traumatic for me. Perhaps it’s because the bad ones linger longer than the good ones. They become dominant. They haunt me. And yet they cannot be relied on as fact. They cannot be nailed down. Only the written version of them becomes fact. And that’s where I live. I don’t believe there is a future. I think it’s a fiction used to keep us from ending it all. And the present slips through our fingers as soon as we experience it.”

‘In Case of Memory, Break Glass’, from True Age Media, available in paperback, Kindle and Audible editions at Amazon.

While art was his passion, for nearly forty years, he made his living working in the fields of Civil Engineering and Surveying. He began as a Rod Man when he was seven years old and worked his way up through the ranks to Project Engineer/Manager.

His writing career began in journalism, as a newspaper reporter, in 1991. Since then he has written eleven books, including a novel, poetry collections, art books and documentaries.

In the 1990s he developed his signature style: “Quadretti,” combining concepts from computer art, tile mosaic and textile arts with a painterly, textural approach to oil painting.

In the 1980s, he was also highly active in the “Underground Music Network,” founding his own label in 1983.

Since then he has produced more than 70 records, appearing on labels in Belgium, Brazil, France, Germany,  Portugal and the USA.

In the 1990s, he expanded his pursuits into video production, beginning with music videos to accompany his music, then moving on to documentaries in 2009.