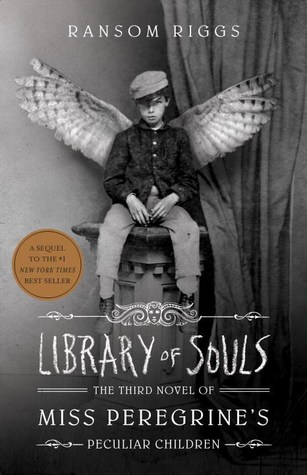 And this is it. The grand finale of the Miss Peregrine’s Peculiar Children series by Ransom Riggs, the first of which has already been produced as a major motion picture about to be released. The series became wildly popular on its initial release due to the quirky story and the images that were included in the read – real photos that had been doctored by the author to appear spooky. It was a gimmick – sure, but it worked. Quirk Books | Sept. 2015 | Hardcover | 458 pp

Library of Souls begins at the cliffhanger end of Hollow City – and you might want to refresh yourself on that last chapter if it’s been a while. Jacob, Emma, and the peculiar dog Addison are back in present day and cornered by a Hollow (baddie type #1 in this series) – but this Hollow isn’t moving. Jacob discovered at the very last minute, just before potentially being devoured by the Hollow, that he has the peculiar ability to speak their tongue and control them. No one can see them except for a few special peculiars, and Jacob is the only one left. Hence – he is the protector of Peculiars.

The rest of their group is gone, stolen by the Wights (baddie type #2 – evolved Hollows) and taken who knows where. With Addison’s trusty snout, they carefully move away from the Hollow and search for the trail that might lead to their friends. Addison leads them to a Peculiar ferryman.

It isn’t Charon the Ferryman, but Sharon, and he takes them to a sort of Hell for Peculiars which is precisely where the scent leads. It is here where dangers lurk around every corner, from a dangerous drug made from the souls of Peculiars, to flesh dealers, to thieves and muggers, to Wights and Hollows. The bigger plot is revealed when they run across Bentham, Miss Peregrine’s third brother, and his magical house of time loop connections. Bentham fills Jacob and Emma in on the story of how their other brother became evil, why it happened, the creation of the Hollows and Wights, and where all of the missing Peculiar children and Ymbrynes are being held.

Jacob and Emma set out to take down an entire fortress filled with Hollows and Wights – just the two of them. But there’s a bright spot. Jacob now knows that he can control the Hollows, and the fortress is filled with them. The monsters switch sides and fight alongside the Peculiars.

What can I say? I wasn’t as thrilled as I hoped I would be. It could be that I waited too long between books, and my connection to the characters was lost. But I think the truth of the matter is that this isn’t a very good story. Each problem solved was done so with a sudden deus ex machina it seemed, and the story just ran in the same direction it had been going without any twists or reveals to keep the reader interested. It was a bit boring. I will say, however, that I did like the conclusion after the climax. It held a good amount of satisfaction in it.

At any rate, I’m glad I’ve finished the series. Although not as scintillating as the first, it was a satisfying conclusion. I’m looking forward to the movie but reader beware: They switched roles and powers of some of the more important Peculiars!

Library of Souls
by Ransom Riggs