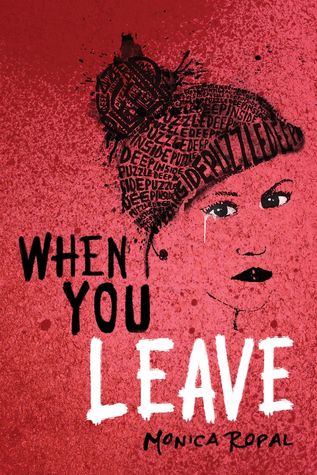 When You Leave is a contemporary Young Adult novel. Don’t let the Young Adult genre turn you away if it is not a genre you usually read, this book is filled with complicated characters and emotional depth.

The main character is Cass, a rebellious teenager who prefers skateboarding and her close friends to school and getting close to guys. She has a life marred by almost tragedy (her best friend Mattie came precariously close to passing away from a sudden illness) as well as abandonment (her father abandoned her mother and doesn’t wish to be part of their family).

Cass is able to keep a distance from people at her new school until a guy named Cooper, preppy and generally not Cass’s type, shows an intense interest in her. He thinks she is different from other girls: “I like you. You’re not like other girls around here. They have two emotions… You have a virtual, I don’t know, rainbow of emotions without even talking.” This startling comment throws Cass off her usual tough chick facade and she maybe wonders if she could find herself becoming close to Cooper and opening herself up to another person after so much heartache and loss in her life.

Tragically, as Cass is toying with the idea of letting Cooper into her heart, he is suddenly murdered. Cass is thrust into another wrenching, heart dropping situation where she has lost someone she cared about. From here the story moves into a murder mystery with Cass apps herself as a would be detective to solve Cooper’s murder.

The novel has realistic characters who you will grow to love as you might love your own friends and the mystery element will keep you reading well into the night to find out the truth.