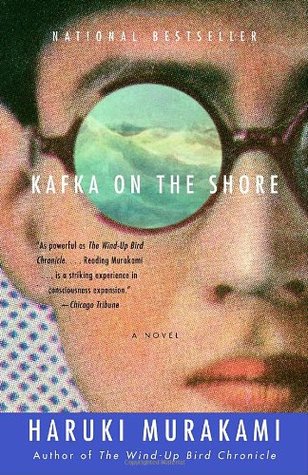 Haruki Murakami is an international bestselling author from Japan with a number of massively popular books to his name. A few years back, I read his 1Q84 omnibus and became an instant fan. It was a slipstream mix of literary and surreal fantasy that captivated my imagination. Kafka on the Shore dwells in the same vein of literary fantasy, dabbling in supernatural lore. When the author has been described as “Kafkaesque”, the title is all too alluring.

Kafka Tamura, an assumed name, is a young teenage boy on the run. He left Tokyo with no real destination in mind except somewhere warm. He left to escape his father’s troubling prophecy that would damn Kafka as a murderer. Things gets strange when he wakes up in the woods covered in blood and no memory of what happened. It looks like his father’s prophecy is coming true no matter how far he runs. With money running low and the police looking for him, Kafka finds a safe haven at a small, public library where its staff of two looks after Kafka.

Nakata was once a normal boy who became a shadow of his former self after a strange incident on a class hiking trip. Now an elderly man who is able to converse with cats, the simple-minded Nakata is tricked into committing a heinous act in order to save the lives of his feline friends. Unable to understand what is happening or why, he inexplicably knows to follow a path set forth by an unseen force. Making friends with a young truck driver, Nakata heads south out of Tokyo and on a collision course with Kafka.

The supernatural and fantastical elements are light but intriguing: the ability to converse with cats, human shadows that aren’t quite natural, fish and leaches raining from the sky, a non-human entity disguised as Colonel Sanders and Johnnie Walker, an invisible boy who is part crow, an otherworldly dimension hidden in a forest and a stone portal. Neither Kafka nor Nakata can really explain was is happening or what is driving them, but the reader is able to see the events happening to both characters as they move toward each other – not that the reader understands what is going on either. Although the characters are largely in the dark, they possess an innate sense of the supernatural world around them, a sense that grows stronger as we reach the final encounters.

The otherworldly being is the most difficult facet to make sense of. It uses bodies as hosts but appears to take the form of whatever it likes – in this case Colonel Sanders from Kentucky Friend Chicken and Johnnie Walker from the scotch label. It seems to be controlling events and people in order to have a gateway opened, something it needs a human to do. This thing, this being, apparently wants to get to this supernatural dimension – but why? We never find out.

“But I don’t have a character. Or any feelings. Shape I may take, converse I may, but neither god nor Buddha and I, rather an insensate being whose heart thus differs from that of a man.”

The connections between characters are conceptual in a manner of speaking. Kafka’s friend and intellectual companion at the library, Oshima, discusses the topic of people who aren’t completely whole – who are broken in some way or missing their other half. In different ways, this accounts for each major character: Kafka who has the invisible boy name Crow speak for him on many occasions, Oshima who is both male and female, Miss Saeki who is an empty vessel mourning her true love, Nakata who feels that he has no soul, and Hoshino who feels an emptiness filled by Nakata. Gradually, we see more connections between the characters as their journeys converge.

Kafka is involved in a lot of spiritual, philosophical, and existential debate with Oshima and Miss Saeki from the library. Although he often lets “the boy named Crow” speak for him, he can also hold his own.

“Strength itself becomes morality.”
Miss Saeki smiles. “You catch on quickly.”
“The strength I’m looking for isn’t the kind where you win or lose. I’m not after a wall that’ll repel power coming from outside. What I want is the kind of strength to be able to absorb that outside power, to stand up to it. The strength to quietly endure things – unfairness, misfortune, sadness, mistakes, misunderstandings.”
“That’s got to be the most difficult strength of all to make your own.”

Don’t expect everything to be tied up in ribbons and bows by the end. Explanations are not provided and there is a lack of information regarding the supernatural events. It’s a vagueness that keeps a level a continuity to the very last page. It’s strange and beautiful and bizarre and it stays that way, keeping an air of beautiful mystery and letting the individual reader theorize on the possibilities.

You don’t have to “get it”. It’s a Murakami thing.

Kafka on the Shore
by Haruki Murakami