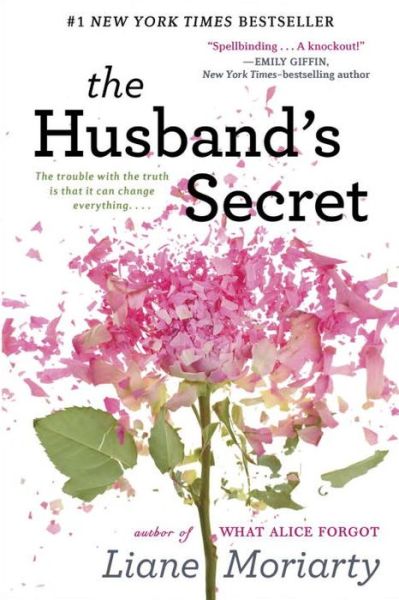 The Husband’s Secret by Liane Moriarty is a novel regarding secrets that many people within one town have kept to themselves for years. Rachel’s daughter, Janie,  was murdered and they have yet to find out who murdered her.  Rachel’s husband has since been deceased and her son Rob is thinking of moving his wife Lauren, and son Jacob to New York. Jacob is Rachel’s only grandson and she is displeased with Rob’s decision to take him away from her.

Rachel works for a school in which Cecilia and John-Paul’s daughters attend.  Cecilia sells tupperware and cares for her three daughters while John Paul, an engineer, is constantly working.  John-Paul seems to be distant with Cecilia, so much so that she suspects that he is having an affair.

Tess and Will are currently going through some rocky times after Will and Tess’s cousin/best friend Felicity confess to falling for each other.  It is even more interesting that Will, Tess, and Felicity all started a business together.  Tess and Will have a young son Liam together.  After finding out that Will and Felicity have feelings for each other, she takes Liam and brings him to her hometown to stay with her mother Lucy.  She enrolls him in school where she reconnects with an ex boyfriend named Connor, who happens to be the PE teacher at Liam’s new school.

Cecilia finds a note upstairs in some old boxes with tax papers that is addressed to her from John-Paul and is to be opened only if he dies.  After asking John-Paul about the letter, he pleads with Cecilia to just ignore it and not open it.  When she catches him trying to find the letter to get rid of it, she tears it open to find a life-changing confession.

Throughout The Husband’s Secret, each of the characters crosses paths with one another.  The secrets that they keep are surprising and maddening.  Although it first seems like there are multiple stories being told, it is easy to make the connection between all of the families by the end of the book. The last chapter makes you wide-eyed and gasping with shock and realization. The title says it all.  One man’s secret is the cause of many struggles, hardships, and anxiety. This was a great read, as is all of Liane Moriarty’s novels!

Such a great read! Keeps you on your toes!

This is a book I would highly recommend

The connection between characters and the unfortunate events that run through multiple families within the story is shocking.