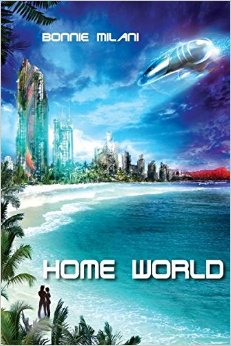 Discovering a new indie author with incredible, mind-blowing talent doesn’t happen every day, but when it happens – the seasoned reader wants to whoop with joy and shout it out to the world.  I have that lovin’ feeling right now. Indie Author Bonnie Milani has put it all out on the line with her debut novel Home World.  She showcases an incredible command of the English language coupled with the dense and sophisticated matters that make hardcore science fiction oh-so-appealing.  Home World is a ‘should-be-Hugo-and-Nebula-winner’, one to astound the toughest of critics – and one that any scifi aficionado should not miss.  In other words:  Holy <censored>, this undiscovered gem is good.  Promontory Press | August, 2013 | Kindle Edition | 496pp

Set far into a war-ravaged future, Earth is now ‘Home World’ to a variety of off-world human species. Genetic splicing and the introduction of various animal DNA strands, as well as engineering for specific purposes, had created a number of genetically different humanoids who now live on various planets.  But they all consider Earth to be Home World, the place of origination.  The wars were over – tentatively – and now Earth exists as a glorified tourist destination, overseen by the Van Buren monarchy from Hawaii.

Jezekiah Van Buren is next in line for the throne, a duty and obligation that he does not want.  For many years he had been on the Outer Rim, trying to find a way to encourage a trade treaty between Earth and the Lupans – an aggressive species of humans with dog-like traits.  The last war with them is why Earth lay in ruin, and why Earth’s commonwealth ranks the lowest in economic gain.  Moreover, it seemed that some of his relatives had been all too eager to create another war with the Lupans and Jezekiah was doing all he could to construct an agreement to protect the people of Earth and better their lives while he was at it. He brings this plan home with him at the beginning of Home World – if he can make it from the docks to the palace without being assassinated by his younger sister Letticia upon arrival.

An assassin is out there but Jezekiah is saved by Kip Marsden, his loyal commander of SecTypes (a genetic designation) in charge of protecting the royal figureheads, and by Keiko Hu – a natural born human with conflicting heritage.  Jezekiah makes it to the palace and meets his noble mother, the high Protector of Earth, for the first time in many years.  His younger sister is being held in seclusion with a charge of treason against her.  Letticia is a tech wiz-kid and spends her paranoid days synced with NetMind, an online virtuosity where mind and worldwide connection meld and where her spying eyes can do the most damage.  Although his sister tried to have him assassinated, and although she infiltrated her mother’s node (high treason), Jezekiah needs her alive for his plan to work.  She receives a stay of execution.

Meanwhile, the Dogs are on their way.  The princely lupen warlord Strongarm along with his feisty and genetically feline accomplice Kaitin have been invited by Jezekiah to sign the treaty – and they’re early. To seal the deal, Jezekiah needs to get Letticia to agree to a marriage proposal.  It has to happen fast because Strongarm is ready to mate and bind to his betrothed.  And with his species – it’s mate or die.

His mother eventually warms to the idea but major complications ensue.  Letticia balks at the idea of marrying a dog, Strongarm isn’t exactly enchanted with the Van Buren princess either, and the lowly Keiko, a samurai in training, has suddenly ended up as the unlikely focus between two royal, and potentially warring, hearts.  Moreover, different factions surreptitiously take advantage of the situation through exerted control over those involved, making puppets out of the figureheads to get what they want.  It soon evolves into a deadly game of determining loyalties and circumventing NetMind hacks, all while trying to thwart imminent war.

The character development in this novel is simply stunning.  For example, Letticia is absolutely batsh** crazy and she constantly commits ridiculous acts of self-sabotaging rebellion that make the reader cringe with disdain.  But the reason for her constant paranoia which leads to her wayward attempts at self-preservation – well, it almost makes you feel bad for her.  Jezekiah certainly does.  She tries to kill him, and he’s there to pick up the pieces and do his best to make her feel safe, because he’s the good big brother who understands where she’s coming from.  Even though there is a moment of pity – it doesn’t last.  I wanted to see her strung up in shackles at the very least.

Keiko is another glorious achievement.  Her complicated ties to the warring factions of the Ho Tung clan (the ones who thrive on the manufacture and export of Venus Seed – a dangerous drug) and the Samurai (enemy of the Ho Tung) are gradually revealed layer by layer throughout the book.  She’s a Cinderella story. Perceived as a monkey by the rest of the earthbound society who are registered ‘types’ in the system, Keiko is a ghost – a non-type and a non-person, a natural born human, and someone who doesn’t register at all in the system.  To herself – she is a non-person.  And that’s why she is going to endure the samurai trials to finally achieve some sort of registered status, if she survives. That goal becomes the least of her concerns when the choice between two thrones are thrust upon her.

My favorite is Strongarm, the lupan warlord.  Although Jezekiah obviously holds a fondness for their honor and their matriarchal society, they are described as brutes who fight to annihilation.  When we finally meet Strongarm, his courteous nature is … surprising.  He’s covered in fur (but with a human face), growls a bit, has talons, and is a virtual lie detector with his ability to sniff out emotion.  Yet, he is surprisingly sensitive and downright honorable.  Expecting a monster, the reader finds a champion.

Home World is quite literally a place where old and new meet on the front lines.  There is the old world culture of samurai training, court loyalties, ‘unregistered’ and ‘non-type’ human culture, and even mythology that all mashes up against the new world of genetic breeding, the ability to sync mind and computer, interstellar travel, high-tech gadgetry, sophisticated holograms, and even robotic majordomos.   Milani mixes the intrigues, loyalties, and betrayals of a royal court with high scifi concepts, a lot of players and pawns, battle royales, and a bit of romance.

“It seemed so natural to slip his arm around her shoulder, to snuggle her into the crook of his arm.  They leaned back together and he saw with new wonder that the Milky Way was spilling diamond dust across the sky.  Keiko tracked his line of sight, her curls dark against the creamy linen of his sleeve, and together they watched the stars rise out of the sea.”

It’s complicated and sophisticated – Milani doesn’t give in with explanations, the reader figures it out along the way.  And once you get entrenched in the read – it is absolutely, undeniably unputdownable. This is the star stuff Hollywood miracles are made from.   You heard me, Hollywood:  Home World – Bonnie Milani – Movie – Now.

Home World is highly recommended to everyone who loves science fiction, fantasy, royal intrigues, romance, strong female protagonists, and to everyone else in between.

I was blown away. I can't get the story out of my head and I am rapidly sinking into a depression because I've finished it and there's no more left to read.

Tagged: post-apocalyptic, science fiction, should be a movie