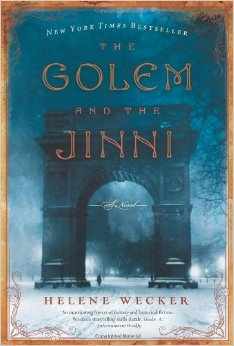 This book has been added to my list of absolute favorite books of all time. I cannot remember the last book I read that immersed me so deeply into a story. The characters felt like people I knew from my past, circa early 1900s. Wecker blends historical fact, captivating fantasy, and myths from ancient religions.

The story begins with the creation of the golem. A man, Otto Rotfield, enlists the help of Schaalman, a disgraced rabbi who supposedly wields magical powers. Rotfield wants Schaalman to create a golem (a creature made from clay which has super human strength and obeys its master’s commands) to be his wife. He needs a wife created for him because he is too vile of a human being for anyone to even consider marrying him. The golem is created in the likeness of a woman. Once the golem is born, she and Rotfield board a ship headed for America. On the way there, Rotfield dies from an illness, leaving the golem on her own in New York City.

Without a master, the golem can hear the desires and fears and needs of all the people around her, and in a city such as New York, this is a huge problem. She is taken in and sheltered by Rabbi Meyer, a man familiar with the dark arts including golem creation. He recognizes the golem for what she is when he sees her on the street. The Rabbi gives the golem a name –  Chava, so she can interact with the public as another human female.

While Chava is acclimating to a human life in the city, another mythical creature is coming to life. In a small shop owned by a man called Arbeely, a flask is rubbed and a Jinni, in the form of a human male, is released. He has been trapped inside by an evil wizard for thousands of years. His home is in the desert, roaming and flying with the other Jinni. There’s a problem however. He has a cuff that keeps him from changing into his true form. He is trapped as a human! Arbeely, once recovered from his shock and fright, gives the Jinni a job in his shop and a name – Ahmad.

Ahmad and Chava naturally discover one another in their late night wanderings of the city, since neither creature requires sleep. They are both instantaneously aware that neither are actually human. Chava, made from the earth, can rip a human in two if she so desired. Ahmad, born of fire, cannot be burned but can be destroyed by water. The two form an unlikely friendship as they navigate the sometimes hostile city and people who are wary of their unusual natures.

Ahmad and Chava incidentally attract two humans to themselves. Ahmad meets a young, wealthy woman with whom they share an instant attraction. Chava ignites passion in Rabbi Meyer’s nephew Michael and must navigate the muddy waters of unrequited love.

Wecker creates two mystical creatures who feel as real as someone you know in real life. We feel their pain and struggles and fear on a deep level. When you put this book down you will be left with a lingering longing to reread the book to be with each character all over again.

This book is ideal for fantasy lovers, historical fiction friends and anyone itching for a book to just fall into.

The Golem and the Jinni
by Helene Wecker