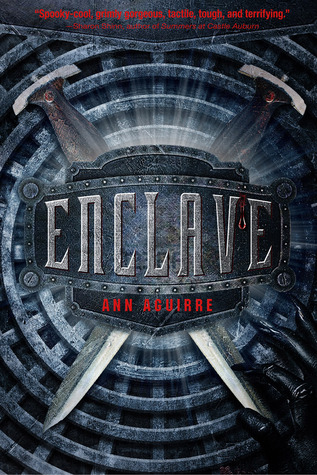 Enclave is the first in the Razorland series, an extremely popular set of young adult books which takes place in a post-apocalyptic America. It features a limited population, uniquely different bands of survivors, and zombie-like creatures that hunt the humans. Hardcover | 2011 | Feiwel & Friends | 259 pp

The story begins with Deuce on her naming day. Deuce and her enclave live in the sewers and subway tunnels as they have done so for generations. Population numbers are strictly managed and each brat is raised to become either a hunter, builder, or a breeder. The hunters patrol the perimeters, battle the freaks, and hunt for food (rats); the builders create tools needed for the populace and the hunters; and the breeders – well, you can guess what they do. Deuce has been trained to be a huntress and only when the brats reach a certain age and finish training do they get a name, and she got Deuce.

Deuce is paired with Fade, a bit of an outcast in their society. He was found in the tunnels when he was young, a lone child who had braved the underworld alone, and he was brought into the enclave to be trained as a hunter. He is the best fighter they have and Deuce is determined to prove that she can hold her own. She was the best fighter in her class. When they battle freaks on their first scouting, she shows him just how good she really is with her knives.

When Deuce and Fade get close, she learns more about him, and how he survived on his own. He was from topside, which should have been impossible – it was unlivable up there. She soon discovers that the leaders of the enclave have been keeping secrets, and to keep those secrets – they kill. When a neighboring enclave is wiped out by a new, stronger pack of freaks, Deuce and Fade are ordered to keep the information secret. Seeing an opportunity to both save her friend and escape, Deuce and Fade are banished from the enclave.

Fade takes Deuce topside where the atmosphere is completely livable. Perfect even. But there are monsters lurking who are even worse than the freaks.

Although I plan to continue with this series, I had … issues.

First: This is a young adult series and yet, I wouldn’t recommend it to any young adults. Parents – I do not suggest going out to get this series for your young teens. There are two different societies in this book that consider women nothing but sexual commodities. Although in one society, women can train to be hunters or builders, the rest are trained for baby-making duty. In the second society, it’s all about rape. I wanted to gag.

Second: Although we have a population where youth is prevalent and people don’t live very long (twenty-five is so ooooold), it insinuates that the majority of people living a post-apocalyptic world are just plain evil – or stupid. Although I believe that a fair amount of lawlessness would ensue during this type of trial, I can’t really see a Mad Max style of gang networks staking out territory and living to kill and claim rape toys generations down the road. I really think most people are better than that.

Third: The underground society is a grab bag of ideas, language, and living style that just doesn’t seem to blend well. There are people living like rats, sleeping in filth and on pallets and barely able to read – and then you have sophisticated hunting parties lining up for a briefing where the leader finishes by saying, “Good Hunting.”

Fourth: We have a scene where a gang member who wanted to claim and rape Deuce is allowed to tag along with Deuce and Fade and somehow, impossibly, begin what looks like a love triangle. Are you serious? I don’t care if he has a backstory we don’t know yet. He clubbed her over the head, tied her up, and took her home. This was ‘almost-rape’ forgiveness. He never actually raped Deuce, but his intentions were implied.

My litany of issues could go on, but I’ll leave you with that. I also want to mention that there are no rape scenes, only mentions of the possibility. There is graphic violence but absolutely no sex scenes, consensual or non.

What I did like: We have an equal pairing with Deuce and Fade. Both are strong and intelligent and capable of holding their own. Deuce is definitely not the damsel in distress and she’s proud to be a huntress. And even with my issues, it was a fun, easy read. I’m going to give the next two a go.