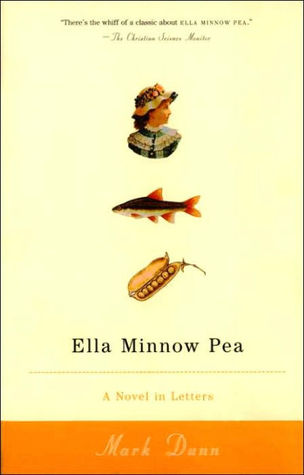 Ella Minnow Pea: A Novel in Letters is a story told in epistolary format where a small island town off the coast of South Carolina is going through some unusual communication problems. In this light fantasy, a community’s love for words is at stake, all because of some faulty glue. Anchor | September, 2002 | Paperback | 208 pp

The tiny island nation of Nollop, independent from the United States, had deified Nevin Nollop, the creator of the pangram The quick brown fox jumps over the lazy dog. You might be familiar with this sentence since it appears next to any new font you might considering downloading. A pangram is a full sentence that uses all letters in the alphabet and they are not easy to create. Since the nation of Nollop had exalted the English language as the highest art form, this sentence is worshiped. Like the giant sign that overlooks Hollywood, Nollop had placed this pangram over the main town of Nollopton. Everything was fine and swell for nearly a century until one of the letters, the letter z, fell.

When it was suggested that they should just put the letter back, the Council objected and then entered a closed-door session to deliberate. It was then announced:

“There was, without a doubt, purpose to the tumble; this event constituting, in my belief, a terrestrial manifestation of Mr. Nollop’s wishes. Mr. Nevin Nollop speaks to us from beyond the grave, my fellow Nollopians.”

And the letter Z was excised from their vocabulary.

The Council enacts harsh punishments for any offenders who speak or write words with the letter z. First offense is a warning. Second offense is a day in the stocks or a public lashing. And the third offense is permanent banishment under the threat of execution for any banished souls who dare to return.

It shouldn’t be too difficult to avoid using the letter z, but it’s all too troubling for Ella Minnow Pea and her family. They don’t believe that Nevin Nollop had returned from the grave to relieve them of the letter. Like most with common sense, they think the letter simply fell and should be replaced. But many more are convinced that it is work of the divine, and suddenly people are quick to turn each other in for the smallest offense. The beekeeper is the first to go since the bees under his control won’t stop buzzing with the offensive letter.

But then another letter falls, and another, and another. Each time, the Council proclaims it to be another divine influence, and these letters must be struck from the vocabulary. The written letters between Ella’s family and her cousin’s family becomes increasingly difficult to write. They don’t want to chance putting in an illegal letter since all communications are being heavily monitored and censored – and not only would the writer be in trouble, but also the person in receipt of the letter.

As the first few letters fall, the written letters become more creative while our adept letter-writers find creative and complicated alternatives for words that contain the offending letters. They retain their good humor and hope that the Council will see reason and eventually reverse the current course. But things go from strange to horrendous quickly. More letters fall, neighbor turns on neighbor with accusations of heresy, and the Council is casting out more and more people – and then taking over their homes and other property in obvious moves of greed shrouded in a strange form of theocracy.

Suddenly, some of the most ardent accusers find themselves alone, with the rest of their family gone. Few people are left and Ella is one of them. There are so few letters left on the giant sign and to save their island nation, she must find another pangram to prove to the Council that Nollop was NOT a god.

Ella Minnow Pea is a short book and hurrah for that. Although I enjoyed the story line and the premise of a language-loving island nation with the threat of missing letters and an overly religious council, the novelty wears off quickly, especially when the language begins to deteriorate. Toward the end, the written letters are a mishmosh of phonetically sounding syllables to replace actual words. It’s quite laborious to interpret.

See what I mean?

The author must have had quite the time to create these missives later on in the book, making sure to avoid each fallen letter at the correct stage. It must have been a painful task. The book is short for lack of letters and for lack of actual words – and ways for words to be interpreted.

I loved the premise – this existential threat to a society built on the love of words. If it weren’t for the Council, I would love to live on this fictional island! But keeping the novel in epistolary format where we are forced to endure the loss of letters along with the characters is a little too gimmicky.


Ella Minnow Pea: A Novel in Letters
by Mark Dunn