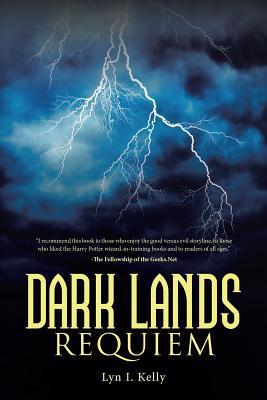 The first in the Dark Lands series, Requiem is a supernatural dark fantasy for young adults. It is high fantasy that takes place in a realm between the living and the dead, or between life and heaven/hell – but not quite purgatory. The Dark Lands, ruled over by skies of rumbling black clouds and lightning strikes, is a delicate balance between good and evil; a balance that must always remain in check to keep the land of the living alive. Lulu Publishing | August, 2015 | Paperback | 216 pp

Requiem begins when Webb and his younger sister suddenly wake up in a field of vibrant green and dark skies, an eerie contrast. They have no idea where they are or where their parents are. And when some watery monsters charge out of nowhere, they make a run for it only to be saved by a giant, hissing cat.

Webb wakes up again in his bedroom – only a dream, right? But it wasn’t and his bedroom is just a recreation within Glorian, a castle safety zone in the Dark Lands. When Webb meets his deceased Uncle Mike and his mentor Mathias, Webb learns that he and his sister had died in the realm of the living. But instead of going to heaven or being reincarnated, they were sent to the Dark Lands for a purpose, and they can’t leave until that purpose is fulfilled.

While in Glorian, they learn the history of the Dark Lands, the balance between incoming good and evil souls, the thousand year wars, and the recent presence of the anomalous Dark Man who arrived without a good-soul compliment. Since the Dark Man’s arrival, Glorian has been the target of nightly assaults beginning exactly at 6 PM, but is was safe inside the castle when the key was turned and the castle magically closed in on itself.

Webb and Sundown also learned to hone their skills. Each incoming Glorian dweller has a certain skill and this is where it becomes ‘Mistborn meets Hogwarts’. Like the Mistborn series where each misting has a unique ability, each person in Glorian also has an ability (there had been the rare individuals like the Mistborn who possessed all of the traits, but they had all been killed off). Like the ‘coinshots’ in Mistborn, Webb’s ability is to disperse – or push away. Sundown can reverse time. They engage in tutorials and classes to learn more about their skills.

When a traitor from within manages to unluck Glorian during the regular 6-7 o’clock assault, Webb is hot on his heels. He thinks he has a clue as to who the culprit might be, but when he finally makes the connection – it might be too late because his sister Sundown is missing.

The character development is a little thin. For example, we know that Webb is angry – sort of an abnormal teenage angst. But we don’t know why. He seems to have had a normal happy and healthy childhood with good parents, so why does he fly into these rages? Nothing is mentioned that would justify this except for normal teenage angst but that doesn’t seem to merit such pent-up aggression. There isn’t much backstory to the siblings at all. We don’t even know how they died – but then again, neither do they. And it was touched upon that their recollections of the living world were hazy at best.

Others have likened Requiem to a bit of Harry Potter by way of Hogwarts and studying the art of wizardry (and there is a definite Snape lookalike winner) but it was much more akin to Mistborn for me. Each member of Kelsier’s group had a special ability, each differing from the other, in order to come together and defeat their foes – each member making that special contribution. Requiem has that same feel. Each person has a unique purpose. But unlike Mistborn, Requiem is for young adults and is a much easier read.

The world building within the Dark Lands is a descriptive feast. There are incredibly vivid elements such as: the safety of Glorian being an ever-changing labyrinthine set of corridors and doors, unless, or course, you know where you want to go; the Willkeeper who is always keeping a book on every soul in existence in his immense library, quite literally (This reminded me of The Magicians series by Lev Grossman!); beautiful horses called the Muradians who are impervious to the evil in the land and can fly at enormous speeds for in-the-nick-of-time fast saves; the pitfalls that anyone can fall victim to such as the Requiem (which shall not be spoiled via description) and veil holes (bottomless pits); and the shrouded and mysterious Dark Man with his host of assorted ‘baddies’.

A fun and easy read, I’m moving on to book two.