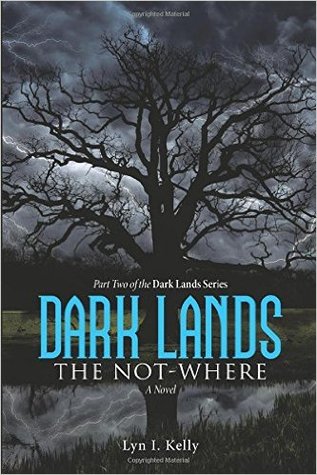 The Not-Where, the second installment in the Dark Lands series, seems to be (whether intended or not) a homage to Harry Potter which differs dramatically from your standard fanfiction fare. In this dark supernatural fantasy for young adults, the author seems to be paying tribute to some of our most beloved characters and moments in the HP Universe while retaining a completely unique story line. This is pure speculation on my part. Lulu Publishing | May, 2016 | Paperback | 210 pp

In the first book Requiem, Webb and his younger sister Sundown are awoken in a land between life and death. In the world as we know it, they had died. But instead of taking the normal path after death, they were brought to the Dark Lands for a purpose. In this strange world with dark skies, every pure soul arrival (Glorian) is countered by the arrival of an evil soul (Vindicadive) and a balance is created. In the Glorian castle, they are introduced to the paranormal skills they already possess and are trained for the final purpose of combat. When the Dark Man’s efforts to infiltrate Glorian and steal Sundown are thwarted by Webb at the end, the Dark Man changes his target to Webb.

In The Not-Where, Webb is immediately assaulted night after night, targeted by a Mind-Stalker under the influence of the Dark Man. Even though he is safe within the confines of Glorian, he is not safe from himself once the effects of nightly nightmare assaults and daily hallucinations take their toll on Webb’s mind. In his dreams, it always seems to come down to a knotted, dead tree that eventually morphs into the Dark Man. During his first nightmare attack, he had chased Sundown out into the night and to the tree – a tree that suddenly shifted and and thrashed its boughs, consuming Sundown. Remind you of the Whomping Willow?

Most of his friends and the council know that Webb is under the influence of the Mind-Stalker but there’s nothing that can be done except to keep an eye on him. In the meantime, Webb helps introduce a newly arrived Glorian by the name of Just Jake into the Dark Lands, discovers how to use  his special skill to fly, learns much more about his obsession with Raven and a deep connection they share, finds out how to commune with his twice-dead uncle, and discovers through conversations with his mentor that the tree he sees in his dreams is very real and is in the land of the Not-Where – a place that turns dreams into reality.

“It exists in the Not-Where,” Mathias answered plainly.
“The Not-Where? What’s the Not-Where?” queried Webb exasperatedly.
“As in Not-Where-You-Want-To-Be!” Kane exclaimed.

Although Webb and Kane, the scar-faced old soul and Webb’s special skill teacher, have been at odds since the day of his arrival, Webb overhears Kane’s plans to leave the safety of Glorian and seek out the Mind-Stalker who is tormenting Webb. It’s a dangerous and potentially deadly risk Kane’s about to take – just for Webb?

“The boy doesn’t need to suffer…”
“I didn’t know you cared so much for Webb,” interrupted Mathias.

I said it in the first review – Kane gave me the impression of a Snape lookalike. He acts like he hates the boy, sort of. But his agenda is only to protect Webb, protect him by being hard on him, teaching him, and saving him. And since Snape is my number one favorite Harry Potter character of all time, I gushed a little. I admit it.

Before Kane can find the Mind-Stalker, Webb finally breaks and runs straight into the checkmate play of the Dark Man.

I’m never a fan of insta-love and so when the immediate attraction between Webb and Raven is explained in this second book, I rolled my eyes a bit. That’s just a personal taste. It really didn’t detract from my speed read in one sitting, something done because I couldn’t put it down.

The absolute best part of this book is the end. It’s a cliffhanger, but not one you would expect at all. The author did something unconventional, breaking away from predictability. He unexpectedly shifted focus at the very end, at the goddamned climax (an epic castle siege), to someone other than the main character, and created a wholly different type of cliffhanger-end. Instead of focusing on Webb and his imminent danger, someone coming to his rescue is … well … you’ll see. There’s no way you won’t be hankering for the next book which, sad to say, isn’t out yet. Damn you, Kelly.

The Dark Lands series is an absorbing read and The Not-Where really picks up the pace. Definitely recommended to high fantasy readers.

Dark Lands: The Not-Where
by Lyn I. Kelly